Of all the sandwiches in the world, there is one sandwich that is distinctly American – the timeless peanut butter and jelly sandwich. According to the National Peanut Board, the average American will have eaten 1,500 peanut butter and jelly sandwiches by the time he or she graduates from high school. This sandwich, which first appeared in the early 1900s, is such a prominent comfort food that it will likely be consumed by Americans for generations to come.

The J.M. Smucker Company (NYSE:SJM) is usually known for its fruit spreads, but it also owns Jif, which has been the best-selling peanut butter in the United States for the past three decades. Hormel owns Skippy, which trails Jif domestically but is more popular internationally.

J.M. Smucker promises cheaper PB&J sandwiches (and coffee) for all 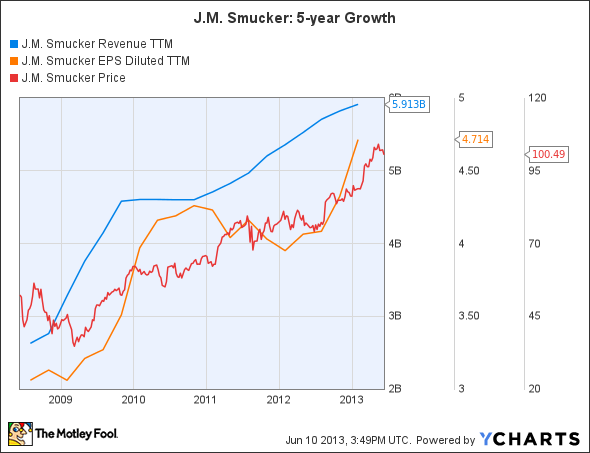 That drop was attributed to a 6% price reduction in its packaged retail coffee brands, which include Folgers and Dunkin’ Donuts. It was an intentional effort to sacrifice some top line growth to generate more lower-priced sales volume. During the quarter, Dunkin’ Donuts coffee was its best-selling packaged coffee brand, posting 29% year-on-year sales growth. The J.M. Smucker Company (NYSE:SJM) also sells K-Cups of its popular coffee brands, which are used with Green Mountain Coffee Roasters Inc. (NASDAQ:GMCR)’ popular Keurig single-serve brewers.

Smucker also lowered the price of its peanut butter and fruit preserves by 10% and 11%, respectively, due to lower commodity costs. The company expects prices for coffee, peanuts and sweeteners to trend lower for the rest of the year, but prices for milk and flour to rise. Lower commodity costs contributed to a 4.7% decline in The J.M. Smucker Company (NYSE:SJM)’s input costs, which boosted gross margin from 33.2% to 35.8%. 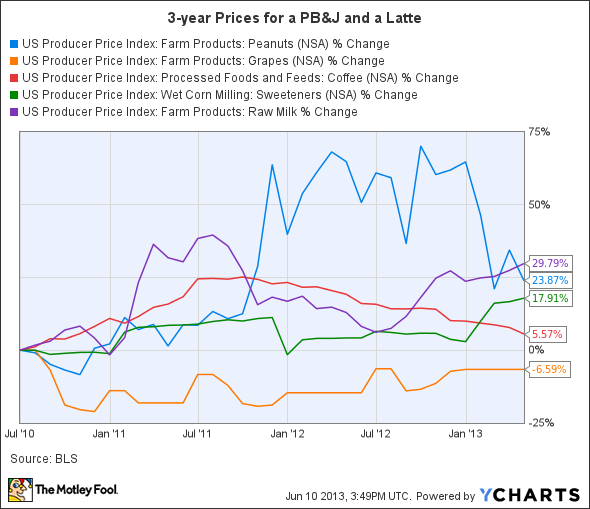 Smucker is spending heavily on its new marketing initiatives, which include new television commercials, digital marketing initiatives and other promotions. I believe that these promotions will lead nicely into the back-to-school season, which should generate higher sales as parents pack their kids’ lunchboxes with peanut butter and jelly sandwiches.

Hormel Foods Corporation (NYSE:HRL), on the other hand, is exposed to a different market. Although the company produces Skippy peanut butter, it is usually associated with pork products and its Spam luncheon meat. Hormel Foods Corporation (NYSE:HRL)’s most recent quarterly earnings were the opposite of The J.M. Smucker Company (NYSE:SJM)’s, reporting a bottom line decline on top line growth. The company’s earnings slid 2% to $0.46 per share, or $125.5 million, but revenue rose 6.9% to $2.15 billion. 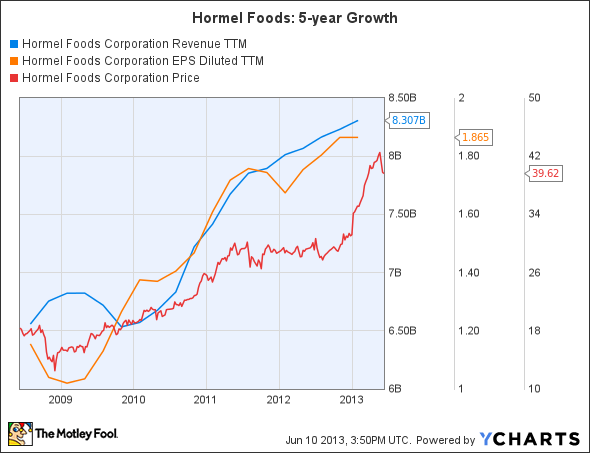 Hormel Foods Corporation (NYSE:HRL)’s sore spot was its Jennie-O Turkey Store business, which accounts for 18% of its top line. The segment reported a 2% sales decline and a 25.9% plunge in operating profit, which it attributed to waning demand for turkey and higher grain costs. Hormel’s refrigerated products segment, which accounts for nearly half of the company’s top line, also posted a 2% revenue decline and a 3.2% drop in operating profit, which it also attributed to higher grain costs.