The J.M. Smucker Company (SJM): Are Hedge Funds Right About This Stock?

The J.M. Smucker Company (NYSE:SJM) investors should be aware of a decrease in enthusiasm from smart money of late. Our calculations also showed that SJM isn’t among the 30 most popular stocks among hedge funds.

What does the smart money think about The J.M. Smucker Company (NYSE:SJM)? 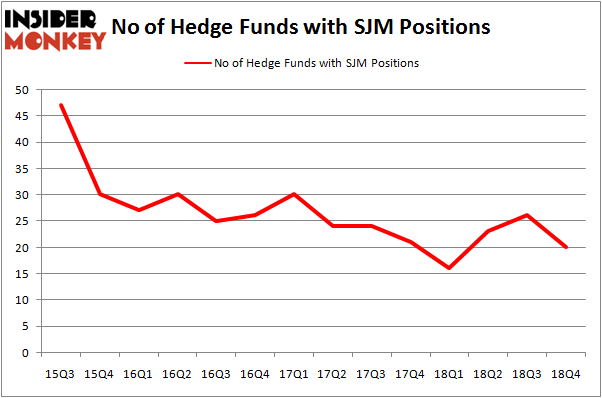 Among these funds, Ariel Investments held the most valuable stake in The J.M. Smucker Company (NYSE:SJM), which was worth $148.5 million at the end of the third quarter. On the second spot was Polaris Capital Management which amassed $34.7 million worth of shares. Moreover, Armistice Capital, GAMCO Investors, and Adage Capital Management were also bullish on The J.M. Smucker Company (NYSE:SJM), allocating a large percentage of their portfolios to this stock.

Seeing as The J.M. Smucker Company (NYSE:SJM) has experienced declining sentiment from hedge fund managers, we can see that there is a sect of money managers that elected to cut their positions entirely by the end of the third quarter. It’s worth mentioning that Greg Poole’s Echo Street Capital Management sold off the biggest position of the 700 funds followed by Insider Monkey, comprising about $21.9 million in stock. Clint Carlson’s fund, Carlson Capital, also sold off its stock, about $17.1 million worth. These bearish behaviors are intriguing to say the least, as total hedge fund interest fell by 6 funds by the end of the third quarter.

As you can see these stocks had an average of 24 hedge funds with bullish positions and the average amount invested in these stocks was $714 million. That figure was $273 million in SJM’s case. Devon Energy Corp (NYSE:DVN) is the most popular stock in this table. On the other hand W.P. Carey Inc. (NYSE:WPC) is the least popular one with only 10 bullish hedge fund positions. The J.M. Smucker Company (NYSE:SJM) is not the least popular stock in this group but hedge fund interest is still below average. This is a slightly negative signal and we’d rather spend our time researching stocks that hedge funds are piling on. Our calculations showed that top 15 most popular stocks among hedge funds returned 19.7% through March 15th and outperformed the S&P 500 ETF (SPY) by 6.6 percentage points. Hedge funds were also right about betting on SJM, though not to the same extent, as the stock returned 13.9% and outperformed the market as well.