The housing market has been recovering well lately. People have started spending on new homes as builders have begun to build new houses and apartments at a higher annual rate of 896,000 for the month of July.

Also, there has been a lot of optimism among U.S. homebuilders as demand for new homes increases. Confidence among homebuilders is at an eight-year high, as reported by the Wells Fargo builder sentiment index.

An improving housing sector has spurred demand for related products as well, which has paved the way for home-improvement retailers to grow. Hence, players such as The Home Depot, Inc. (NYSE:HD) and Lowe’s Companies, Inc. (NYSE:LOW) are enjoying higher demand for their products.

A quick look at the stock-price movement of these two companies in the last two years will give a better picture of how both retailers have recovered from the effects of the economic slowdown. 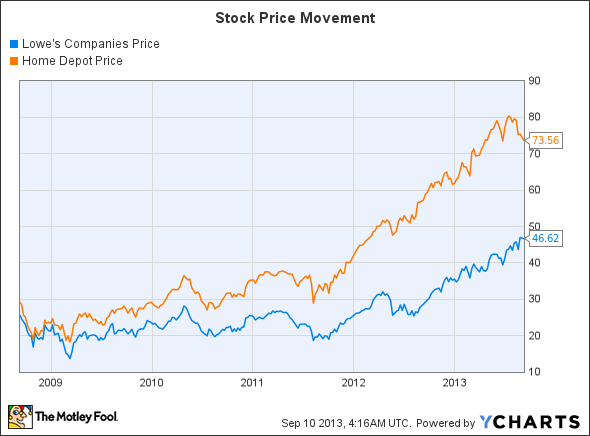 Both of the retailers have been growing steadily, especially The Home Depot, Inc. (NYSE:HD). The company reported its recent quarter, which witnessed a 9.5% increase in its top line and a jump of 17% in its bottom line as customers spent more money. Also, shoppers bought more bigger-ticket items, which drove revenue higher. This enabled the home-improvement retailer to raise its earnings outlook for the year to $3.60 per share, along with a sales growth of 4.5%.

However, Lowe’s Companies, Inc. (NYSE:LOW) has been performing well too, trying to bridge the gap with its largest competitor. Its recent quarter was a great example wherein it beat analysts’ expectations. Its same-store sales growth, a key metric to gauge a retailer’s performance since it ignores the effect of stores opened or closed during the period, was pretty impressive at 9.6%. This was quite close to The Home Depot, Inc. (NYSE:HD)’s metric for the quarter, which stood at 10.7%.

Also, if we look at the stock price appreciation in the last year, Lowe’s Companies, Inc. (NYSE:LOW) outperformed The Home Depot, Inc. (NYSE:HD). Its return to investors was double that of its competitor, as highlighted in the chart below. 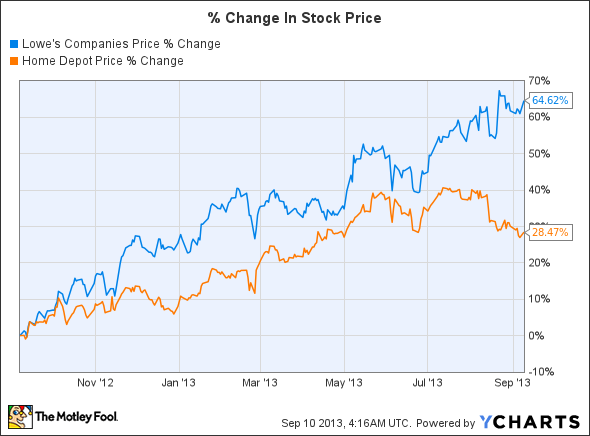 Lowe’s Companies, Inc. (NYSE:LOW) key strategy of offering the lowest price possible seems to be working really well, driving revenue higher by 10.3% to $15.7 billion and pushing earnings up by 26% to $941 million. Also, it has been offering permanently low prices on many items across its stores, which attracted a lot of customers.