You should stock up for the coming economic collapse, because American businesses aren’t. A just-released Commerce Department report adds to the growing list of indices pointing to a major economic decline coming our way. February inventories rose just 0.1%, well below the 0.4% increase economists had anticipated and much worse than the downwardly revised 0.9% increase seen in January.

When companies slowly rebuild their inventories, as they are now, it means factories produce less, lowering overall economic output. And if we look at the Institute for Supply Management’s inventory survey for March, we get a sense that when Commerce releases its own figures for the month, it’s going to look ugly. The ISM survey showed a 2% decline in March inventories to 49.5, an indication that things are contracting at an accelerated rate.

The down escalator
That’s on top of a collapse in consumer confidence, the non-participation rate in the labor market hitting Depression-era levels, unadjusted weekly unemployment claims jumping again, vehicle sales missing estimates, and a whole slew of other economic indicators coming in below expectations.

Clothing and accessories retailers had their best showing in February, as inventories gained 3% from January. Yet as we saw just recently, March retail sales contracted, so the uptick that was enjoyed is apparently over already, and coupled with a gloomy consumer outlook, those tax increases implemented at the start of the year are beginning to weigh down the economy. 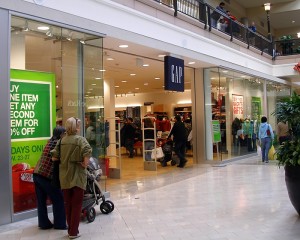 Try this on for size
While some clothing shops such as The Gap Inc. (NYSE:GPS) beat analyst expectations on same-store sales last month, the fact that they were down 1% anyway is hardly a source of confidence. The TJX Companies, Inc. (NYSE:TJX) was down 2.2%, while Ross Stores, Inc. (NASDAQ:ROST) was up 2%, actually beating expectations, but far below the 10% jump it experienced a year ago.

Although some of the sales declines in March were the result of lower gas sales, Americans also spent less on other goods. Even among big-box retailers, the results were disappointing. Costco Wholesale Corporation (NASDAQ:COST) reported that same-store sales rose 4% in March, but they were significantly below the 5.2% analysts were anticipating. Overall, the Thomson Reuters index of retailers showed that comps grew just 2.2% last month, its lowest showing since September 2009.

Running off the road
One of the bright spots of the economy has been automakers, but there, too, car sales fell 1.3% in March to an annual pace of 15.3 million, down from 15.4 million the month before. Where Ford Motor Company (NYSE:F), General Motors Company (NYSE:GM), and Chrysler all reported sales gains, they couldn’t make up for the losses at many foreign manufacturers, and it’s showing, as car sales are steadily falling.

Many analysts point to the increase in taxes at the start of the year, particularly payroll taxes, as the lead cause for the slack showing up. The economy appears to be ratcheting down rather abruptly, following Europe’s epic slide into a double-dip recession that even China couldn’t stanch.

Perhaps we don’t need to act like doomsday preppers, but then again, stocking up for a potentially harsh outcome like a squirrel storing nuts for the winter might not be a bad idea after all.

The article Stock Up for the Coming Collapse originally appeared on Fool.com.

Fool contributor Rich Duprey has no position in any stocks mentioned. The Motley Fool recommends Costco Wholesale (NASDAQ:COST), Ford, and General Motors and owns shares of Costco Wholesale and Ford.