How do we determine whether The Estee Lauder Companies Inc (NYSE:EL) makes for a good investment at the moment? We analyze the sentiment of a select group of the very best investors in the world, who spend immense amounts of time and resources studying companies. They may not always be right (no one is), but data shows that their consensus long positions have historically outperformed the market when we adjust for known risk factors.

Is The Estee Lauder Companies Inc (NYSE:EL) undervalued? Prominent investors are in a pessimistic mood at the margin but the hedge fund sentiment towards the stock is still near its all time high. The number of long hedge fund positions dropped by 3 in recent months. Our calculations also showed that EL isn’t among the 30 most popular stocks among hedge funds (see the video below). EL was in 36 hedge funds’ portfolios at the end of June. There were 39 hedge funds in our database with EL holdings at the end of the previous quarter. 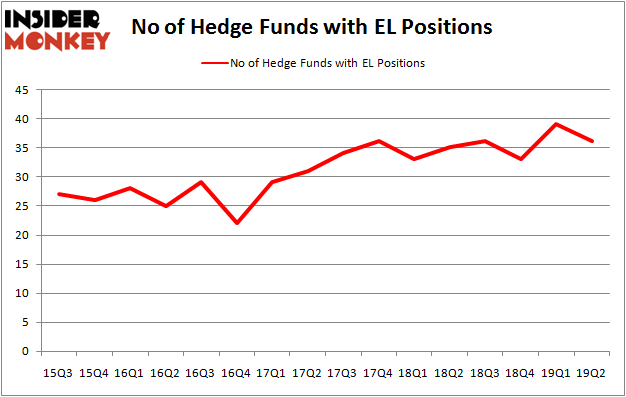 Unlike some fund managers who are betting on Dow reaching 40000 in a year, our long-short investment strategy doesn’t rely on bull markets to deliver double digit returns. We only rely on hedge fund buy/sell signals. Let’s take a peek at the key hedge fund action encompassing The Estee Lauder Companies Inc (NYSE:EL).

Heading into the third quarter of 2019, a total of 36 of the hedge funds tracked by Insider Monkey were bullish on this stock, a change of -8% from the first quarter of 2019. By comparison, 35 hedge funds held shares or bullish call options in EL a year ago. With hedge funds’ positions undergoing their usual ebb and flow, there exists a few key hedge fund managers who were increasing their holdings significantly (or already accumulated large positions).

Due to the fact that The Estee Lauder Companies Inc (NYSE:EL) has witnessed falling interest from the aggregate hedge fund industry, it’s easy to see that there is a sect of money managers who were dropping their positions entirely by the end of the second quarter. Interestingly, Israel Englander’s Millennium Management cut the largest stake of the 750 funds tracked by Insider Monkey, totaling about $147.7 million in stock, and Jeffrey Talpins’s Element Capital Management was right behind this move, as the fund cut about $29.3 million worth. These transactions are important to note, as aggregate hedge fund interest dropped by 3 funds by the end of the second quarter.

As you can see these stocks had an average of 37.25 hedge funds with bullish positions and the average amount invested in these stocks was $3280 million. That figure was $1355 million in EL’s case. Celgene Corporation (NASDAQ:CELG) is the most popular stock in this table. On the other hand Equinor ASA (NYSE:EQNR) is the least popular one with only 13 bullish hedge fund positions. The Estee Lauder Companies Inc (NYSE:EL) is not the least popular stock in this group but hedge fund interest is still below average. Our calculations showed that top 20 most popular stocks among hedge funds returned 24.4% in 2019 through September 30th and outperformed the S&P 500 ETF (SPY) by 4 percentage points. Hedge funds were also right about betting on EL as the stock returned 8.9% during the same time frame and outperformed the market by an even larger margin.