The top-three non-alcoholic beverage companies in America aren’t on a level playing field, but one company is coming out of nowhere to challenge the “big two” at their own game. Now could be the beginning of something big for this company, so shareholders should get ready for the ride. 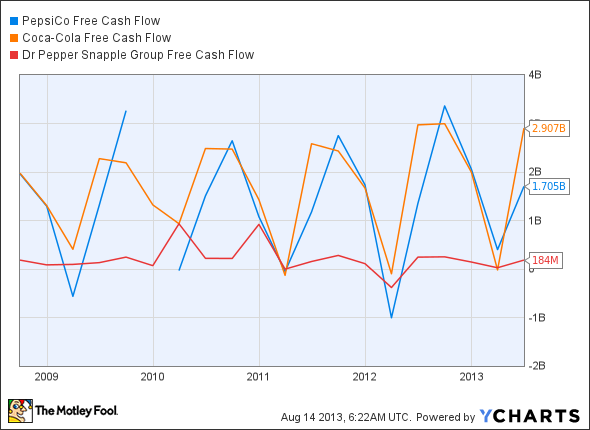 Dr Pepper Snapple Group Inc. (NYSE:DPS) controls 16% of the non-alcoholic beverage market, while Coca-Cola and PepsiCo control 40% and 30%, respectively. For every one percentage point increase the company manages, revenue will increase — and so too will the share price. It will be much harder for the other two businesses to make gains in the domestic beverage market considering they likely have achieved nearly a full customer base.

Dr Pepper Snapple Group Inc. (NYSE:DPS) has managed to increase its market share substantially over the past four years, and that is largely due to offering original products that stick with customers. With the revenue generated from each one of these streams, the company will be able to develop more popular products, increasing revenue again, and the cycle continues until Dr Pepper Snapple Group Inc. (NYSE:DPS) is controlling an even greater market share. At that point, it should consider global expansion–and that is when shareholder value will really spike.

Coca-Cola has faced an uphill battle over health concerns surrounding its sodas. Artificial sweeteners are among the most criticized components of the company’s beverage and have damaged sales of diet soda. In order for Coca-Cola to avoid further declines, it will need to develop a campaign that improves the brand image — and it is doing just that.

The company recently announced its intention to run a USA Today print ad around Atlanta, another in the Atlantic Journal Constitution, and then one in the Chicago Tribune. But the company will need to do more to defend its product, which is continually being sidelined for healthier alternatives.