The Cheesecake Factory Incorporated (CAKE) Hedge Funds Are Snapping Up

Before we spend days researching a stock idea we’d like to take a look at how hedge funds and billionaire investors recently traded that stock. S&P 500 Index ETF (SPY) lost 8.7% through October 26th. Forty percent of the S&P 500 constituents were down more than 10%. The average return of a randomly picked stock in the index is -9.5%. This means you (or a monkey throwing a dart) have less than an even chance of beating the market by randomly picking a stock. On the other hand, the top 25 most popular S&P 500 stocks among hedge funds had an average loss of 8.8%. In this article, we will take a look at what hedge funds think about The Cheesecake Factory Incorporated (NASDAQ:CAKE).

The Cheesecake Factory Incorporated (NASDAQ:CAKE) investors should be aware of an increase in hedge fund interest lately. Our calculations also showed that CAKE isn’t among the 30 most popular stocks among hedge funds.

At the end of the third quarter, a total of 21 of the hedge funds tracked by Insider Monkey were bullish on this stock, a change of 11% from one quarter earlier. By comparison, 17 hedge funds held shares or bullish call options in CAKE heading into this year. With the smart money’s sentiment swirling, there exists an “upper tier” of key hedge fund managers who were boosting their stakes meaningfully (or already accumulated large positions). 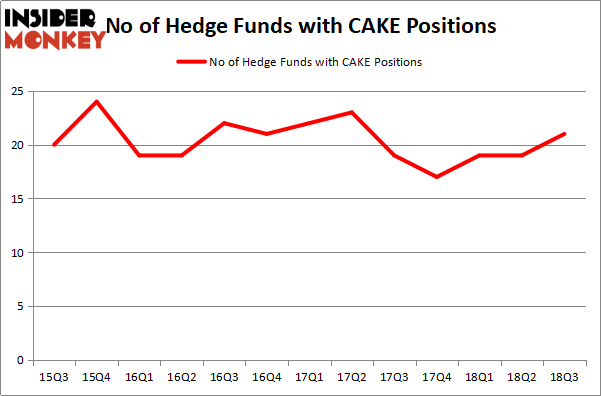 When looking at the institutional investors followed by Insider Monkey, Armistice Capital, managed by Steven Boyd, holds the biggest position in The Cheesecake Factory Incorporated (NASDAQ:CAKE). Armistice Capital has a $58.9 million call position in the stock, comprising 3.5% of its 13F portfolio. On Armistice Capital’s heels is AQR Capital Management, managed by Cliff Asness, which holds a $47.3 million position; less than 0.1%% of its 13F portfolio is allocated to the company. Some other hedge funds and institutional investors with similar optimism encompass Mario Gabelli’s GAMCO Investors, John Overdeck and David Siegel’s Two Sigma Advisors and Lee Ainslie’s Maverick Capital.

As aggregate interest increased, key money managers were leading the bulls’ herd. Balyasny Asset Management, managed by Dmitry Balyasny, initiated the most outsized call position in The Cheesecake Factory Incorporated (NASDAQ:CAKE). Balyasny Asset Management had $5.4 million invested in the company at the end of the quarter. D. E. Shaw’s D E Shaw also made a $2.1 million investment in the stock during the quarter. The other funds with brand new CAKE positions are Mike Vranos’s Ellington and Michael Platt and William Reeves’s BlueCrest Capital Mgmt..

As you can see these stocks had an average of 24.75 hedge funds with bullish positions and the average amount invested in these stocks was $428 million. That figure was $152 million in CAKE’s case. Avaya Holdings Corp. (NYSE:AVYA) is the most popular stock in this table. On the other hand Mallinckrodt Public Limited Company (NYSE:MNK) is the least popular one with only 20 bullish hedge fund positions. The Cheesecake Factory Incorporated (NASDAQ:CAKE) is not the least popular stock in this group but hedge fund interest is still below average. This is a slightly negative signal and we’d rather spend our time researching stocks that hedge funds are piling on. In this regard AVYA might be a better candidate to consider a long position.

Hedge Funds Are Dumping Varonis Systems Inc (VRNS)
Monthly Newsletter Strategy
Download a free copy of our newsletter and see the details inside!
Hedge Fund Resource Center
Related News
Should You Consider Adding Cheesecake Factory Inc (CAKE) to Your Portfolio’s Menu? Why ConocoPhillips, Amgen, Alere & Three Other Stocks Are Trending Today Will The Cheesecake Factory Incorporated (CAKE) Fatten Up Your Investment Portfolio? What Is Going On With These 4 Falling Stocks? Do Hedge Funds and Insiders Love Bloomin’ Brands Inc (BLMN)? Arcos Dorados Holding Inc (ARCO): Hedge Funds Aren’t Crazy About It, Insider Sentiment Unchanged This Metric Says You Are Smart to Buy The Wendy’s Company (WEN) 11 Countries With The Worst Modern Music In The World The Top 5 Robo Advisor Apps of 2018 Five Reasons You Need a Day-Trading Mentor
Billionaire Hedge Funds