Are you looking for a stock to short? I will develop a bear case for Fusion-IO, Inc. (NYSE:FIO) in two parts, where I will analyze the fundamentals, business, and recent acquisitions of this IT company. It seems that more chest pain for shareholders could be on the way. That is, if they still hold their long positions after a disastrous yearly performance: stock price is down almost 28%, and I do not see any signals of improvement in the near future. 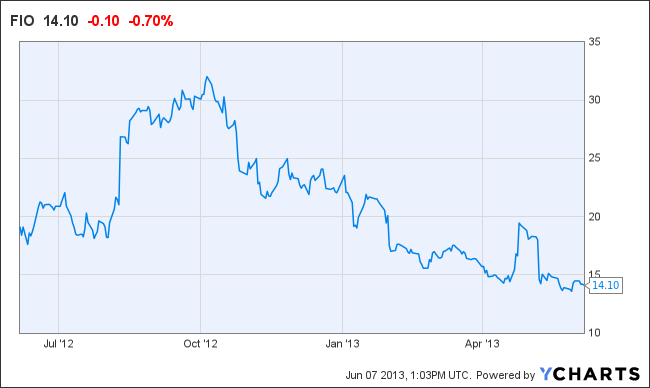 The first time I heard about this company was after reading a special report by Victor Bonilla on SumZero. The reasons he provided were so convincing that, despite having high expectations from Fusion-io’s business, I decided to research about this particular firm.

These two articles summarize my findings. In the first article, I start by providing an overview of Fusion-IO, Inc. (NYSE:FIO)’s businesses and develop one bear case. In the second article, I will provide two more bear cases and one variant view. Stay tuned!

Founded in 2005, Fusion-io is all about increasing the computing power of servers for data storage processes by using solid-state drives (SSDs) that plug into the PCIe slot.
One Fusion-IO, Inc. (NYSE:FIO) device can perform I/O as fast as several hundred of the fastest traditional hard drives. This translates into less operating and maintenance expenses in the long run. For example, the company mentions an interesting study case: how they helped Japanese Internet giant Rakuten achieve efficiency:

What kind of clients does the company target?

Basically, anybody who has big data. According to the firm’s website: from e-commerce retailers to the world’s social media leaders and Fortune Global 500 companies, our customers are improving the performance and efficiency of their data centers with Fusion-IO, Inc. (NYSE:FIO) technology to accelerate the critical applications of the information economy.

In practice, Fusion-io has two big customers, Apple and Facebook. The firm’s revenue is so dependent on them that when the two companies delayed their orders in early January, the stock price fell 12%. More recently, on the latest earnings call, Co-Founder and CEO David Flynn (who renounced some weeks ago) confirmed the importance of these two clients:

Our relationship with Facebook Inc (NASDAQ:FB) and Apple Inc. (NASDAQ:AAPL) is strong. Their orders this quarter were in line with our expectations. They are a key -we are a key part of their infrastructure and expect to grow as they grow.

It doesn’t surprise me then that Fusion-IO, Inc. (NYSE:FIO)’s stock is performing so terribly this year. But the story does not end here.

1. Decreasing revenue growth rates will make it hard to beat the Street consensus next quarter

The company has achieved profitability only once so far, in 2011. That should not be very worrying if we assume that the company is still in “an early stage.” If so, the growth rate of revenue should be typical of a company in its “early stage.” That is not the case here. According to data from Morning Star, the growth rate of revenue is decreasing.

“Turn now to revenue. Our revenue was $87.7 million in the quarter and it represented 7% decline in year-over-year growth. Core revenue, which excludes contribution from Facebook and Apple, stood at $68 million, growing 61% year-over-year. Of our 10% customers in the quarter, Facebook represented 16%, HP represented 19%, Dell represented 17% and IBM represented 11%. Our key industry vertical this quarter were web services, public sector and once again, telecommunications. In the coming quarters, we will provide additional color on verticals as we continue to outgrow customer concentration. We will still provide visibility into customers that represent 10% or more of revenue.” (Dennis Wolf, CFO)