The 6 Scariest Halloween Costumes Ever Screamed At

Scariest Halloween Costumes Ever: The idea of what constitutes a truly scary Halloween costume has changed drastically over time. Where it used to be about the pure shock value or originality, now it’s more about how good the individual costume looks. In the digital age every costume one could think up is most likely online in some form, so it’s almost impossible to score high in any sort of originality score.

In addition, in large part due to social media, people have pushed their Halloween costume ambitions and spending to new heights in recent years as people recognize the opportunity to be seen by millions of people on the internet should their costume go viral. This hasn’t necessarily been a positive though, as we recently ranked the 30 worst Halloween costume ideas ever brought to horrible life.

So, in order to rank the scariest Halloween costumes ever, we avoided things like budget and instead looked at the scariest costumes out of choices that are used on at least a semi-consistent basis, as opposed to short-lived, Hollywood-style, blockbuster costumes that the average consumer could never replicate.

Now then, lets take a look at the scariest Halloween costumes ever: 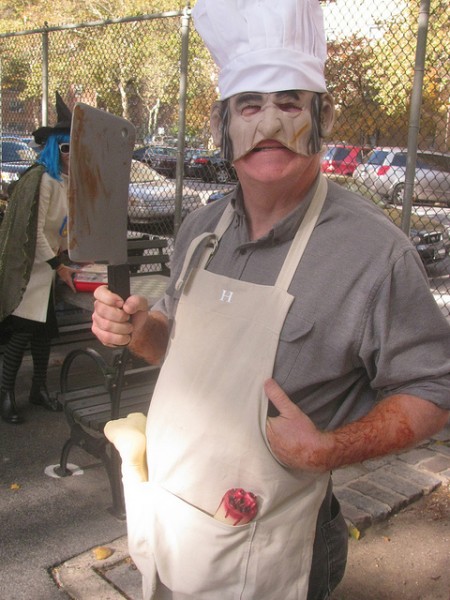 If it were more popular, it would definitely be higher on this list. Personally, an Angry Butcher scares the crap out of me. I’m not sure if I’ve just seen too many movies (lookup ‘Midnight Meat Train’), but angry butcher costumes are generally scary. They almost all come with an over-sized cutting knife, and blood on an apron. The more the person portraying the butcher actually looks like they could be a butcher in real life, the scarier the costume will be. Yet, no matter who is donning the costume, an angry butcher will remain a scary option every October.

The scariest Halloween costumes ever continue on the next page with a horrifying movie favorite.