It takes a buck to make a buck. That’s true for individual investors and the corporate giants in the S&P 500 alike. Through the history of capitalism and investing, capital is the lifeblood that makes growth possible.

That’s the reason I am bullish on the biggest cash generators in the S&P 500. In response to the 2008 financial implosion and ongoing economic uncertainty, the S&P 500 has accumulated record cash in the past four years.

Third-quarter earnings highlighted the cash-hoarding trend, where many companies continued to save instead of investing in growth, according to JP Morgan. This pushed cash balances up 14% from last year and on track to hit $1.5 trillion, both record levels.

But even though that big financial cushion is making the private sector feel more comfortable, companies will eventually loosen the purse strings and begin to spend. This is just a matter of pure growth. This growth could be organically or through acquisition, but capital spending on new products and markets is a great way to increase sales. 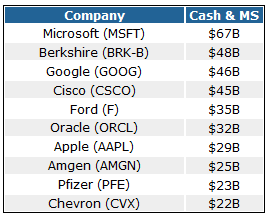 And when companies start to invest in growth, then savvy investors will benefit.

Besides product and market acquisitions, companies withlots of cash can also buy back shares. This has been a very popular move this year, with many cash-rich companies announcing additional buybacks to reward investors.

Though hoarding cash seems to be popular these days, looking forward, cash-heavy companies are going to be sitting pretty when it’s time to be aggressive again.

These 10 companies (excluding financials) had the highest cash balances at the end of the third-quarter, but only three stand out as my favorite stocks to profit from when these companies start spending again.

Microsoft has been trapped in the ultimate range trade for the past 12 years, spending 90% of its time oscillating between $25 and $30. But that’s actually normal for a blue chip with a heavy $230 billion market cap. But this stagnant share price belies the company’s still very dominant position in many markets. Make no mistake, Microsoft still earns plenty of money.

Shares trade at only 10 times projected earnings of $2.88 per share for 2012, a sharp discount to the 10-year average of 17 times earnings. And don’t forget, Microsoft has turned itself into a solid dividend payer with a very solid yield of 3.4%. That’s how the company is giving money back to shareholders. Microsoft will never be the highflier it once was, but it has settle into a stable stock that pays a nice dividend. The fact that it appears undervalue now is just the cherry on top. 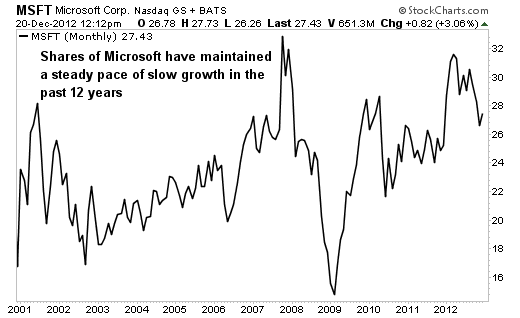 iPad Vs Surface Tablet: An Interesting Take on Apple’s iPad vs. Microsoft...

Hewlett-Packard Company (HPQ): Even If Icahn Doesn’t Buy, Should You?
Monthly Newsletter Strategy
Download a free copy of our newsletter and see the details inside!
Hedge Fund Resource Center
Billionaire Hedge Funds