Taylor Morrison Home Corp (NYSE:TMHC) was in 19 hedge funds’ portfolios at the end of the second quarter of 2019. TMHC investors should pay attention to an increase in enthusiasm from smart money recently. There were 12 hedge funds in our database with TMHC holdings at the end of the previous quarter. Our calculations also showed that TMHC isn’t among the 30 most popular stocks among hedge funds (see the video below).

According to most investors, hedge funds are seen as worthless, outdated financial tools of years past. While there are over 8000 funds with their doors open at present, We choose to focus on the upper echelon of this group, about 750 funds. It is estimated that this group of investors watch over most of the smart money’s total capital, and by shadowing their best picks, Insider Monkey has come up with a few investment strategies that have historically exceeded the broader indices. Insider Monkey’s flagship hedge fund strategy surpassed the S&P 500 index by around 5 percentage points a year since its inception in May 2014. We were able to generate large returns even by identifying short candidates. Our portfolio of short stocks lost 25.7% since February 2017 (through September 30th) even though the market was up more than 33% during the same period. We just shared a list of 10 short targets in our latest quarterly update . 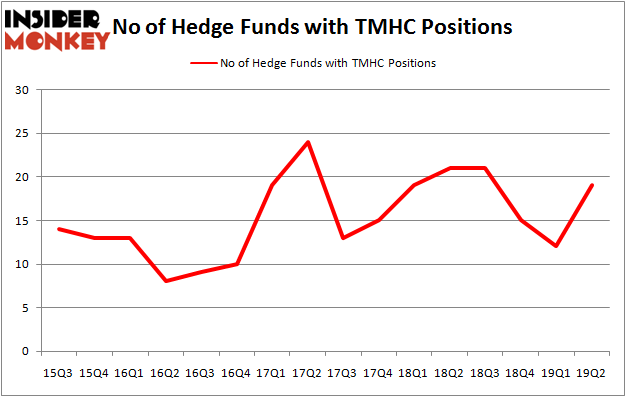 How have hedgies been trading Taylor Morrison Home Corp (NYSE:TMHC)?

At Q2’s end, a total of 19 of the hedge funds tracked by Insider Monkey were bullish on this stock, a change of 58% from the previous quarter. Below, you can check out the change in hedge fund sentiment towards TMHC over the last 16 quarters. With the smart money’s sentiment swirling, there exists a select group of notable hedge fund managers who were adding to their holdings significantly (or already accumulated large positions).

Of the funds tracked by Insider Monkey, Echo Street Capital Management, managed by Greg Poole, holds the largest position in Taylor Morrison Home Corp (NYSE:TMHC). Echo Street Capital Management has a $57.6 million position in the stock, comprising 1% of its 13F portfolio. Coming in second is Edgar Wachenheim of Greenhaven Associates, with a $57.2 million position; 1% of its 13F portfolio is allocated to the stock. Remaining hedge funds and institutional investors that are bullish consist of Israel Englander’s Millennium Management, Brian Ashford-Russell and Tim Woolley’s Polar Capital and Matthew Lindenbaum’s Basswood Capital.

As you can see these stocks had an average of 16.5 hedge funds with bullish positions and the average amount invested in these stocks was $164 million. That figure was $260 million in TMHC’s case. Biohaven Pharmaceutical Holding Company Ltd. (NYSE:BHVN) is the most popular stock in this table. On the other hand Inovalon Holdings Inc (NASDAQ:INOV) is the least popular one with only 7 bullish hedge fund positions. Taylor Morrison Home Corp (NYSE:TMHC) is not the most popular stock in this group but hedge fund interest is still above average. Our calculations showed that top 20 most popular stocks among hedge funds returned 24.4% in 2019 through September 30th and outperformed the S&P 500 ETF (SPY) by 4 percentage points. Hedge funds were also right about betting on TMHC as the stock returned 23.8% during the third quarter and outperformed the market. Hedge funds were rewarded for their relative bullishness.