The latest 13F reporting period has come and gone, and Insider Monkey is again at the forefront when it comes to making use of this gold mine of data. We at Insider Monkey have plowed through 821 13F filings that hedge funds and well-known value investors are required to file by the SEC. The 13F filings show the funds’ and investors’ portfolio positions as of March 31st, a week after the market trough. In this article we look at what those investors think of Lowe’s Companies, Inc. (NYSE:LOW).

Is Lowe’s Companies, Inc. (NYSE:LOW) a buy right now? The best stock pickers are becoming less hopeful. The number of bullish hedge fund positions went down by 6 lately. Our calculations also showed that LOW isn’t among the 30 most popular stocks among hedge funds (click for Q1 rankings and see the video for a quick look at the top 5 stocks). LOW was in 71 hedge funds’ portfolios at the end of March. There were 77 hedge funds in our database with LOW positions at the end of the previous quarter.

At Insider Monkey we leave no stone unturned when looking for the next great investment idea.  For example Europe is set to become the world’s largest cannabis market, so we check out this European marijuana stock pitch. We believe electric vehicles and energy storage are set to become giant markets, and we want to take advantage of the declining lithium prices amid the COVID-19 pandemic. So we asked astrophysicist Neil deGrasse Tyson about Tesla, Elon Musk, and his top stock picks. We read hedge fund investor letters and listen to stock pitches at hedge fund conferences. Our best call in 2020 was shorting the market when S&P 500 was trading at 3150 after realizing the coronavirus pandemic’s significance before most investors. With all of this in mind let’s analyze the fresh hedge fund action regarding Lowe’s Companies, Inc. (NYSE:LOW).

At the end of the first quarter, a total of 71 of the hedge funds tracked by Insider Monkey were long this stock, a change of -8% from one quarter earlier. On the other hand, there were a total of 56 hedge funds with a bullish position in LOW a year ago. With hedgies’ sentiment swirling, there exists an “upper tier” of notable hedge fund managers who were increasing their stakes substantially (or already accumulated large positions). 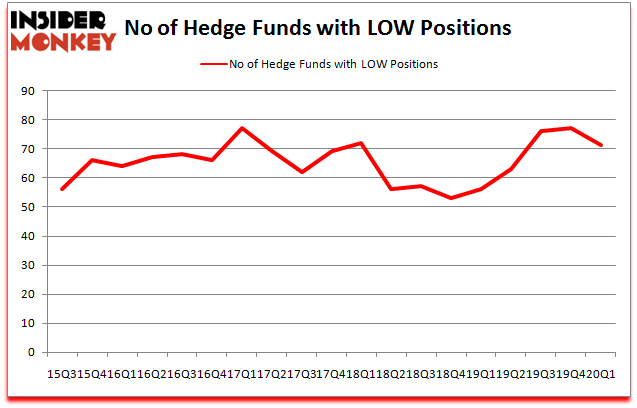 More specifically, Pershing Square was the largest shareholder of Lowe’s Companies, Inc. (NYSE:LOW), with a stake worth $1054.3 million reported as of the end of September. Trailing Pershing Square was D E Shaw, which amassed a stake valued at $628.3 million. Viking Global, OZ Management, and Palestra Capital Management were also very fond of the stock, becoming one of the largest hedge fund holders of the company. In terms of the portfolio weights assigned to each position Pershing Square allocated the biggest weight to Lowe’s Companies, Inc. (NYSE:LOW), around 16.04% of its 13F portfolio. Venator Capital Management is also relatively very bullish on the stock, earmarking 7.12 percent of its 13F equity portfolio to LOW.

Because Lowe’s Companies, Inc. (NYSE:LOW) has witnessed declining sentiment from the aggregate hedge fund industry, logic holds that there is a sect of fund managers that decided to sell off their positions entirely by the end of the third quarter. Intriguingly, Aaron Cowen’s Suvretta Capital Management cut the largest investment of the 750 funds tracked by Insider Monkey, valued at close to $142.3 million in stock. John Khoury’s fund, Long Pond Capital, also dropped its stock, about $87.4 million worth. These bearish behaviors are interesting, as total hedge fund interest fell by 6 funds by the end of the third quarter.

Let’s now take a look at hedge fund activity in other stocks – not necessarily in the same industry as Lowe’s Companies, Inc. (NYSE:LOW) but similarly valued. These stocks are Fiserv, Inc. (NASDAQ:FISV), Caterpillar Inc. (NYSE:CAT), Stryker Corporation (NYSE:SYK), and Becton, Dickinson and Company (NYSE:BDX). This group of stocks’ market valuations are closest to LOW’s market valuation.

As you can see these stocks had an average of 51.25 hedge funds with bullish positions and the average amount invested in these stocks was $1827 million. That figure was $3845 million in LOW’s case. Fiserv, Inc. (NASDAQ:FISV) is the most popular stock in this table. On the other hand Caterpillar Inc. (NYSE:CAT) is the least popular one with only 34 bullish hedge fund positions. Compared to these stocks Lowe’s Companies, Inc. (NYSE:LOW) is more popular among hedge funds. Our calculations showed that top 10 most popular stocks among hedge funds returned 41.4% in 2019 and outperformed the S&P 500 ETF (SPY) by 10.1 percentage points. These stocks returned 7.9% in 2020 through May 22nd but still managed to beat the market by 15.6 percentage points. Hedge funds were also right about betting on LOW as the stock returned 42.9% so far in Q2 (through May 22nd) and outperformed the market by an even larger margin. Hedge funds were clearly right about piling into this stock relative to other stocks with similar market capitalizations.