Whole Foods Market, Inc. (NASDAQ:WFM) had a strong third quarter, yet again outperforming its peers SUPERVALU INC. (NYSE:SVU) and Safeway Inc. (NYSE:SWY). Whole Foods has been on a good run, and a look at its metrics over the last five years clearly proves that: 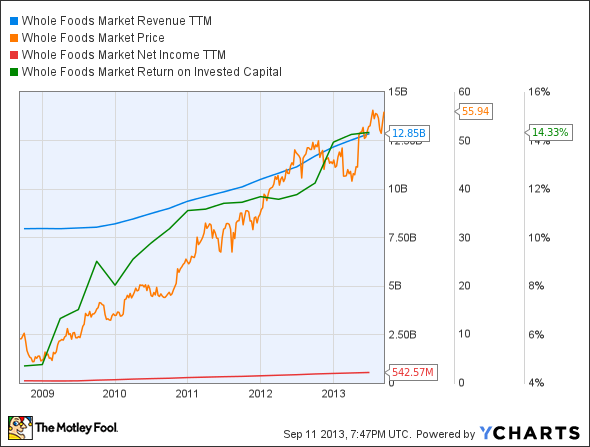 Whole Foods Market, Inc. (NASDAQ:WFM) is operating in a market where growth is driven by consumer trends toward healthier living. With an aging, affluent, and health-conscious population moving toward the concept of organic and natural food for healthier living, Whole Foods certainly has some tailwinds.

So, even by conservative estimates, the organic food market would still be a minuscule 1.5% of the entire food retail market by the end of 2016 if these growth projections are correct. This leaves a huge potential for growth.

Whole Foods Market, Inc. (NASDAQ:WFM) is also working to shed its image of being only for affluent shoppers. Stores are opening up in lower-income areas and in smaller markets, ranging from 20,000 square feet to 70,000 square feet in size.

It has announced plans to build an 18,000 sq ft store in Englewood, one of Chicago’s most impoverished neighborhoods. This store will be operational in 2016. If its low-cost stores manage to do well, we can expect to see Whole Foods Market, Inc. (NASDAQ:WFM) stores in many of the under-served communities in the rest of the country.

Money-saving tips using coupons and via information on its website have also been offered to shoppers. The discounts have not had much of an impact on gross margins, which have held steady at around 36.6%, 60 basis points higher than the same quarter a year ago.

Safeway Inc. (NYSE:SWY), the second largest grocer in the country after Kroger, is relying on multi-pronged strategies like implementing loyalty programs and investing in new or replacement stores to push up sales going forward. “Just for U” has been reported to be a success: It is estimated that this loyalty program could end up with over 6 million members. These customers are frequent visitors to stores, and about 50% of its top-line is being attributed to this category of shoppers.