SUPERVALU INC. (NYSE:SVU), Safeway Inc. (NYSE:SWY) , and The Kroger Co. (NYSE:KR) have been up double and even triple digits in the last year. Supermarkets still have some of the thinnest margins of any industry so one has to wonder: is the party over?

The excitement over The Kroger Co. (NYSE:KR) may be justified as it agreed to acquire Harris Teeter supermarkets, a chain of middle to high end supermarkets located in the mid-Atlantic and southeast, for $2.5 billion. Harris Teeter competes against privately held Wegman’s, a chain that gets the highest ratings from shoppers year after year. Harris Teeter and Wegman’s are both building new stores near me competing head-to-head. Harris Teeter stores are also a rival of Whole Foods Market, Inc. (NASDAQ:WFM) for the higher end grocery dollar.

The Kroger Co. (NYSE:KR) had little exposure to the affluent Eastern seaboard until now with the addition of 212 Harris Teeter stores but did they pay too much for a saturated market?  According to Fellow Fool Timothy Green’s analysis The Kroger Co. (NYSE:KR) is paying a 28 earnings multiple for Harris Teeter.  Fine, if that would really place them in a competitive advantage in this region, but Safeway Inc. (NYSE:SWY) and Giant Food and other grocer brands owned by Royal Ahold are dominating grocers in the mid-Atlantic region, not to mention Whole Foods Market, Inc. (NASDAQ:WFM) doing well in this area. And, there’s a plethora of smaller chains, including Weis Markets, bottom dollar, Food Lion, etc., if all the loyalty tags on my keychain are any indication (ten at last count).

The Kroger Co. (NYSE:KR), the nation’s biggest grocer, is trading at 52-week highs after the announcement with an 82.46% surge in share price this last year. This party is definitely winding down as the easy money has been made. Now that The Kroger Co. (NYSE:KR) has added even more debt to the balance sheet, pushing $10 billion, it’s looking less attractive. The yield isn’t that hot at this level, only 1.6% and trailing P/E is 13.43. 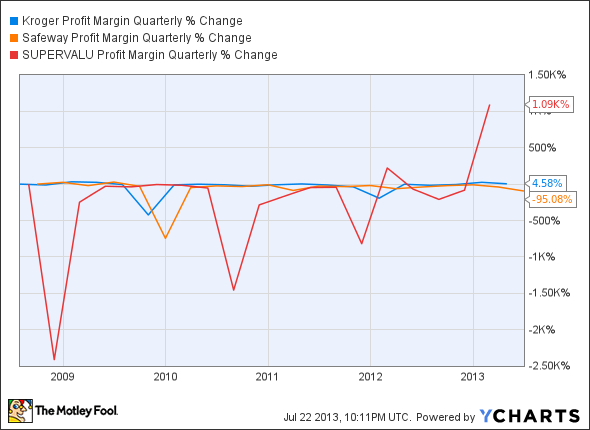 Is this party winding down, too?

SUPERVALU INC. (NYSE:SVU) had been a disaster the last few years with the share price dropping to $2.00 giving reason to think the ticker was an acronym for Supermarket Victims Unit. It was easy to justify not wanting to join this party. However, it has run a whopping 234% in the last 52 weeks. Part of this run is attributable to big short squeezes with a current decreasing short interest at 25.70%. The forward P/E for 2015 is 13.89 so it seems the market has already priced in future growth.

SUPERVALU INC. (NYSE:SVU) already has a presence in the mid-Atlantic with 55 Shoppers Food & Pharmacy stores and 46 Farm Fresh stores in Virginia for a total of 191 under its Retail Food segment. The company operates 350 and licenses an additional 950 Save-A-Lot stores. The company has a third leg of business with its wholesale distribution segment.

The company seems to be on track to execute its turnaround: eliminating the dividend, selling off its banners Albertsons, Acme, Jewel-Osco, Shaw’s and Star Market in March to Cerberus Capital, refinancing $400 million worth of loans and extending them to 2021, and finally, shaking up the Board of Directors with new appointments and a new CEO, Sam Duncan

The company reported Q1 2014 results of an improvement to gross profit margin of 13.8% to net sales  from 13.5% for the the year-ago quarter due to cost-cutting initiatives and reducing the declines in sales at all three segments. Adjusted EPS came in at $0.14 better than the expected $0.04 but revenues at $5.16 billion didn’t quite meet the expected $5.17 billion.