People need to eat.  It’s just a fact of life, and as such the supermarket industry fared better than many in the recent downturn. However, several stores still suffered because of longer-term trends. 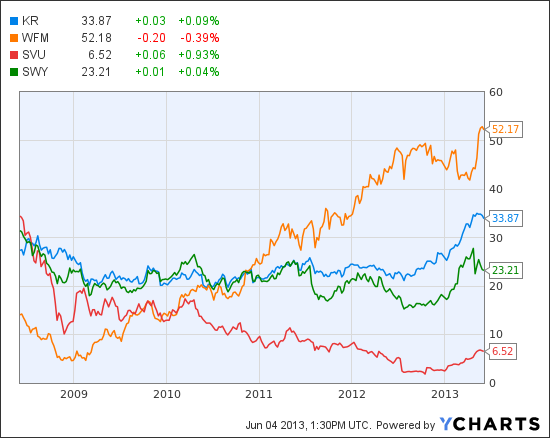 SUPERVALU INC. (NYSE:SVU) combines its supermarket business with a wholesale food logistics business. It operates or licenses around 1500 stores, mostly in the budget line Save-A-Lot which has 1,331 stores. The company also operates 29 distribution centers forming the largest food logistics business in the country. Its financials are weak, having suffered a loss of $1.04 billion in 2012, although the company did reduce its outstanding debt by about $500 million. The company’s main focus to get itself out of this rut is “hyperlocal” retailing. Sprinkled through the company’s literature is the idea that it intends to become America’s neighborhood grocer (SuperValu Inc (NYSE:SVU).). It have given managers more control over their stores and engaged in a number of other actions in pursuit of this goal. This plan was launched in 2012, and may well be successful; with the rise of organic foods and the push to buy locally, farmers markets and other such stores with a similar approach have done reasonably well. However, it is too early to see if this approach will work for SUPERVALU INC. (NYSE:SVU).

Safeway Inc. (NYSE:SWY) is in a better position than SUPERVALU INC. (NYSE:SVU). The company’s baseline revenue is increasing rapidly and with it so is its profitability. Total in-store sales were up about 5%, and earnings-per-share were up about 21%. The company’s debt level is rather high at $5.57 billion, and it is increasing slowly. However, a high level of debt is common in this industry and should not necessarily cause significant concern. Furthermore, the company’s debt is backed by a large asset base of $15.47 billion (Safeway.com). This is combined with a low price-to-earnings ratio of 8.63, less than half of the market average. One would expect a ratio like this if the company was faltering or at least not growing, but that is not the case. Furthermore, it has a dividend yield of 3.5%, which provides nice payments as it grows  (Yahoo! Finance). So this stock has significant growth potential and is already starting to grow, having increased by 22% in the last six months. It has an established position in a stable industry, however, and thus will likely provide steady, albeit low, returns even if it does not continue to surge in price.

The Kroger Co. (NYSE:KR) offers an interesting case in that its financials are sound. Unlike some of its competitors, for example, it has an investment-grade debt rating and is growing in a number of sectors. Notably, its pharmacy business grew strongly, including attracting and retaining Express Scripts business (Krogers). Its market share increased in 10 of its 19 markets.  It also offers a dividend of about 1.8% and has a price-to-earnings ratio of only 12.36. There is one substantial downside, however. Throughout its most recent investor call, it made statements about how it is committed to accomplishing various goals but does not state how it actually will go about accomplishing them, even when it has failed to accomplish the same goals in the past. This raises the question of whether it has a plan or a clear sense of direction. The stock has been doing well recently, up by a little under 40% over the last six months, but unless the company can get a clear sense of direction, it will likely falter (Yahoo Finance).