It is easy to forget that we are already living in the midst of peak oil. In the past, oil prices and oil production roughly increased with each other. Around 2005, the world seemed to hit a brick wall. Oil prices increased, but global production just ticked higher. There are still profitable ways to invest in the energy market, but trying to find a company that will bring online an extra five million barrels per day is almost impossible. It is better to focus on smaller companies, or corporate giants that can develop new infrastructure. 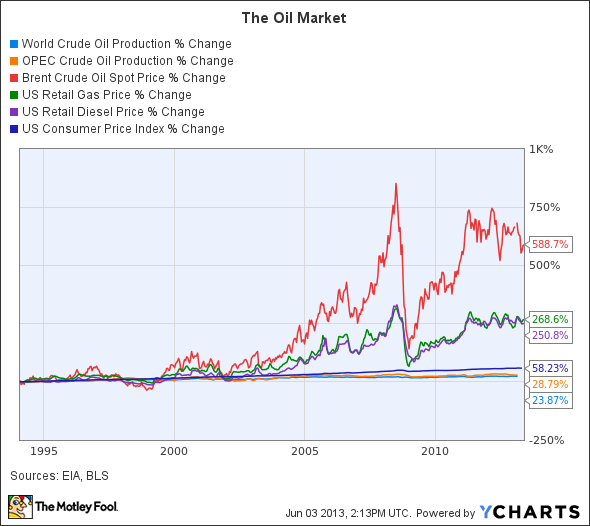 Suncor Energy Inc. (USA) (NYSE:SU) is looking for growth in Alberta’s heavy oil sands fields. The company is nowhere near the size of the oil majors like Exxon Mobil Corporation (NYSE:XOM). This is a great benefit for Suncor’s investors, because it means that the 300 thousand barrels of production that the company wants to bring online by 2020 will have a substantial impact on its bottom line.

For long-term investors with multi-year horizons, Suncor Energy Inc. (USA) (NYSE:SU) is a good investment to watch. It has almost no debt with a total debt to equity ratio of 0.28. Its return on investment (ROI) of 5.7% and profit margin 6.2% are encouraging, given the challenges of being far away from U.S. refineries.

Royal Dutch Shell plc (ADR) (NYSE:RDS.A) is facing the music. For years, it has tried to drill in the Arctic to open up new fields, but it was recently forced to cancel its drilling. Now, it is trying to use its large capital base to develop a world class network of LNG assets. Cooling natural gas and transporting it around the world isn’t easy. New projects like Canada’s Kitimat LNG export terminal will allow Shell to profit from the world’s energy system without having to find and extract hydrocarbons.

The company has a low debt load with a total debt to equity ratio of just 0.2. It offers a dividend of 4.60% and a profit margin of 5.60%, but investors need to realize that the company is huge and will not offer very high growth.

Considering that the majority of crude oil is used for transportation fuels like gasoline, the rise of electrical vehicles is an effective way for the world to deal with peak oil. Toyota Motor Corporation (ADR) (NYSE:TM) sells one of the world’s most popular hybrid models; the Prius. As of the end of March 2012, Toyota had sold a total of 2.6 million Prius’ since 1997. Considering that in fiscal year 2012 Toyota sold a total of 7.4 million vehicles, it is clear that the Prius still a niche product.

Countries continue using crude oil and gasoline, but slowly they are readying themselves for a world with less oil. Even though Toyota sells a number of quality hybrid vehicles, it has in no way abandoned traditional gasoline vehicles. The company does carry some debt with a total debt to equity ratio of 1.15, but its debt load is significantly less than Ford Motor Company (NYSE:F)‘s. Toyota’s ROI of 4.7% and profit margin 4.9% show that the company is making money, even if does trade at high valuations.

Recently, Toyota Motor Corporation (ADR) (NYSE:TM) decided invest $50 million in Tesla Motors Inc (NASDAQ:TSLA). The company sells its latest Model S sedan. The company is not trying to force the broad market to accept fully electrical vehicles. It is targeting the upper-end of the market where consumers can afford to spend more than $600 per month on a fancy toy.

As an investment, Tesla Motors Inc (NASDAQ:TSLA) looks very risky. It has a total debt to equity ratio of 2.7, a ROI of (52)% and trades at a price to book ratio of 67. Investing in Tesla is a very high risk proposition, as its product is relatively new and it has a substantial debt load.

Ford Motor Company (F)’s Feat in the Hybrid Segment is ‘Energizing the...

Why Should You Be Bullish on General Motors Company (GM)?