The financial regulations require hedge funds and wealthy investors that exceeded the $100 million equity holdings threshold to file a report that shows their positions at the end of every quarter. Even though it isn’t the intention, these filings to a certain extent level the playing field for ordinary investors. The latest round of 13F filings disclosed the funds’ positions on September 30th. We at Insider Monkey have made an extensive database of nearly 750 of those established hedge funds and famous value investors’ filings. In this article, we analyze how these elite funds and prominent investors traded Stanley Black & Decker, Inc. (NYSE:SWK) based on those filings.

Is Stanley Black & Decker, Inc. (NYSE:SWK) a worthy investment today? The smart money is in a bearish mood. The number of long hedge fund bets dropped by 1 recently. Our calculations also showed that SWK isn’t among the 30 most popular stocks among hedge funds (click for Q3 rankings and see the video below for Q2 rankings). SWK was in 26 hedge funds’ portfolios at the end of the third quarter of 2019. There were 27 hedge funds in our database with SWK holdings at the end of the previous quarter.

According to most market participants, hedge funds are seen as underperforming, outdated investment tools of years past. While there are more than 8000 funds with their doors open at present, Our experts hone in on the bigwigs of this club, approximately 750 funds. These hedge fund managers command bulk of all hedge funds’ total capital, and by keeping track of their inimitable picks, Insider Monkey has identified a few investment strategies that have historically exceeded the market. Insider Monkey’s flagship short hedge fund strategy beat the S&P 500 short ETFs by around 20 percentage points per annum since its inception in May 2014. Our portfolio of short stocks lost 27.8% since February 2017 (through November 21st) even though the market was up more than 39% during the same period. We just shared a list of 7 short targets in our latest quarterly update .

Unlike the largest US hedge funds that are convinced Dow will soar past 40,000 or the world’s most bearish hedge fund that’s more convinced than ever that a crash is coming, our long-short investment strategy doesn’t rely on bull or bear markets to deliver double digit returns. We only rely on the best performing hedge funds‘ buy/sell signals. We’re going to review the fresh hedge fund action encompassing Stanley Black & Decker, Inc. (NYSE:SWK). 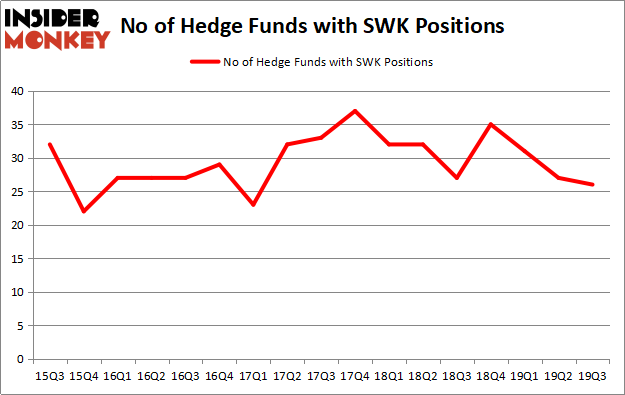 Among these funds, Pzena Investment Management held the most valuable stake in Stanley Black & Decker, Inc. (NYSE:SWK), which was worth $325 million at the end of the third quarter. On the second spot was Citadel Investment Group which amassed $209 million worth of shares. Holocene Advisors, Ariel Investments, and Millennium Management were also very fond of the stock, becoming one of the largest hedge fund holders of the company. In terms of the portfolio weights assigned to each position Pzena Investment Management allocated the biggest weight to Stanley Black & Decker, Inc. (NYSE:SWK), around 1.77% of its portfolio. Ariel Investments is also relatively very bullish on the stock, earmarking 1.24 percent of its 13F equity portfolio to SWK.

Since Stanley Black & Decker, Inc. (NYSE:SWK) has faced bearish sentiment from the entirety of the hedge funds we track, it’s easy to see that there was a specific group of hedgies that elected to cut their full holdings last quarter. It’s worth mentioning that Israel Englander’s Millennium Management sold off the largest stake of the “upper crust” of funds watched by Insider Monkey, valued at an estimated $29.1 million in stock, and Howard Marks’s Oaktree Capital Management was right behind this move, as the fund dropped about $2.9 million worth. These transactions are important to note, as aggregate hedge fund interest dropped by 1 funds last quarter.

As you can see these stocks had an average of 34.5 hedge funds with bullish positions and the average amount invested in these stocks was $1215 million. That figure was $1040 million in SWK’s case. Snap Inc. (NYSE:SNAP) is the most popular stock in this table. On the other hand Essex Property Trust Inc (NYSE:ESS) is the least popular one with only 18 bullish hedge fund positions. Stanley Black & Decker, Inc. (NYSE:SWK) is not the least popular stock in this group but hedge fund interest is still below average. Our calculations showed that top 20 most popular stocks among hedge funds returned 37.4% in 2019 through the end of November and outperformed the S&P 500 ETF (SPY) by 9.9 percentage points. A small number of hedge funds were also right about betting on SWK, though not to the same extent, as the stock returned 9.7% during the first two months of the fourth quarter and outperformed the market.