The market has been volatile as the Federal Reserve continues its rate hikes to normalize the interest rates. Small cap stocks have been hit hard as a result, as the Russell 2000 ETF (IWM) has underperformed the larger S&P 500 ETF (SPY) by about 4 percentage points through November 16th. SEC filings and hedge fund investor letters indicate that the smart money seems to be paring back their overall long exposure since summer months, and the funds’ movements is one of the reasons why the major indexes have retraced. In this article, we analyze what the smart money thinks of Spirit Airlines Incorporated (NASDAQ:SAVE) and find out how it is affected by hedge funds’ moves.

Is Spirit Airlines Incorporated (NASDAQ:SAVE) a buy here? Hedge funds are taking a bullish view. The number of long hedge fund positions moved up by 3 recently, and there were 20 smart money investors with long positions in the company. In spite of this recent bullishness, the company wasn’t even close to making it as one of the 30 most popular stocks among hedge funds in Q3 of 2018. Even though the company was not one of the most favorite stocks in the third quarter, considering this recent enthusiasm for it, we feel that it the company requires further research.

While collecting more data about Spirit Airlines Incorporated (NASDAQ:SAVE), we tracked down FPA Capital Fund’s Third Quarter Report, in which this hedge funds discuses its position in the company. We bring you that part of the report:

“One of the largest contributors during the third quarter was Spirit Airlines (NYSE: SAVE). SAVE is an ultra- low-cost airline offering flights throughout the United States, as well as to and from the Caribbean, Mexico, Central America, and South America. We invested in SAVE because of its industry-leading cost advantage, which allows the airline to sustainably offer lower fares than peers at margins that support attractive, full- cycle returns on capital. Further, while the ultra-low-cost model clearly offers value to consumers, we believe it still represents only a small portion of domestic capacity, providing a long-term ‘runway’ for future growth.”

At the moment there are a large number of metrics investors have at their disposal to assess their holdings. A duo of the less known metrics are hedge fund and insider trading moves. Our experts have shown that, historically, those who follow the best picks of the best money managers can trounce the market by a solid amount (see the details here).

What does the smart money think about Spirit Airlines Incorporated (NASDAQ:SAVE)?

Heading into the fourth quarter of 2018, a total of 20 of the hedge funds tracked by Insider Monkey were long this stock, a change of 18% from one quarter earlier. The graph below displays the number of hedge funds with bullish position in SAVE over the last 13 quarters. With hedge funds’ sentiment swirling, there exists a select group of noteworthy hedge fund managers who were boosting their holdings meaningfully (or already accumulated large positions). 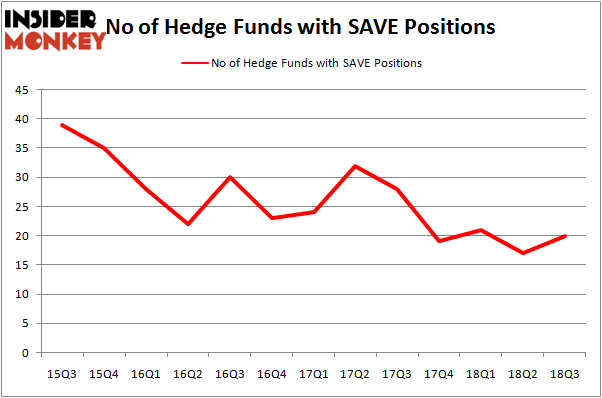 The largest stake in Spirit Airlines Incorporated (NASDAQ:SAVE) was held by Citadel Investment Group, which reported holding $87.2 million worth of stock at the end of September. It was followed by Polar Capital with a $68.6 million position. Other investors bullish on the company included Arlington Value Capital, Tyvor Capital, and Mountain Lake Investment Management.

Consequently, key money managers have been driving this bullishness. Blue Mountain Capital, managed by Andrew Feldstein and Stephen Siderow, initiated the most valuable position in Spirit Airlines Incorporated (NASDAQ:SAVE). Blue Mountain Capital had $4.9 million invested in the company at the end of the quarter. Ward Davis and Brian Agnew’s Caerus Global Investors also made a $4 million investment in the stock during the quarter. The following funds were also among the new SAVE investors: Craig C. Albert’s Sheffield Asset Management, Sara Nainzadeh’s Centenus Global Management, and Richard Driehaus’s Driehaus Capital.

As you can see these stocks had an average of 19 hedge funds with bullish positions and the average amount invested in these stocks was $284 million. That figure was $375 million in SAVE’s case. KLX Inc (NASDAQ:KLXI) is the most popular stock in this table. On the other hand National Health Investors Inc (NYSE:NHI) is the least popular one with only 10 bullish hedge fund positions. Spirit Airlines Incorporated (NASDAQ:SAVE) is not the most popular stock in this group but hedge fund interest is still above average. This is a slightly positive signal but we’d rather spend our time researching stocks that hedge funds are piling on. In this regard KLXI might be a better candidate to consider a long position.

Do Hedge Funds Love EZCORP Inc (NASDAQ:EZPW)?
Monthly Newsletter Strategy
Download a free copy of our newsletter and see the details inside!
Hedge Fund Resource Center
Related News
Will VR Stocks Disrupt the Travel Industry? 10 Companies with the Worst Customer Service in 2017 7 US Airlines That Have Widest Seats in Economy Class Do Hedge Funds Love Spirit Airlines Incorporated (SAVE)? Why Are These Five Stocks in Spotlight Today? Why Hudson Technologies, Spirit Airlines, DragonWave, and Two Other Stocks Are in Spotlight Have a Look at Teewinot Capital’s Top Picks as Tiger Cub Firm Raises Capital for New Fund 5 Most Socially Responsible Companies in America 5 Ways You Can Eliminate Credit Card Debt 10 Easiest Road Test Sites in NY and NJ
Billionaire Hedge Funds