With everyone talking about how the great gold boom is over, that with the price of gold tumbling to $1,400 an ounce the back of the yellow metal as a safe-haven investment  has been broken, you might be surprised to learn there’s actually a new gold rush going on. With every drop in the price of gold (and silver, too), individuals are buying as much of the precious metal as they can.

According to the former assistant secretary of the Treasury under President Reagan, Dr. Paul Craig Roberts, the price collapse was an orchestrated attack on gold and silver coordinated by the Federal Reserve. The assault saw prices plunge an unprecedented 10% in one day at one point.  SPDR Gold Trust (ETF) (NYSEMKT:GLD) is now 12% lower from where it started April, while the iShares Silver Trust (ETF) (NYSEARCA:SLV) is down 18%.

For the tinfoil hat brigade, the collapse, coming as it did just days after President Obama met with the heads of Goldman Sachs Group, Inc. (NYSE:GS), JPMorgan Chase & Co. (NYSE:JPM) and Bank of America Corp (NYSE:BAC), was enough of a nexus to indicate that this was a response to the threats posed by gold (and even Bitcoin) to the Federal Reserve system. 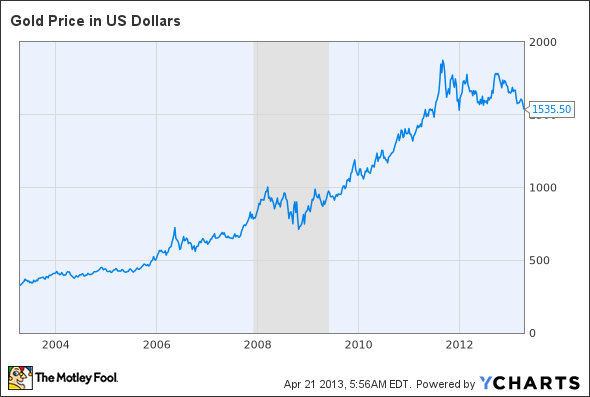 While I’m not sure I buy into conspiracy theories like that, I do know that if it’s true, then the Law of Unintended Consequences must surely be at play. There’s anecdotal evidence everywhere that despite the dumping of tons of paper gold assets on the market, demand for physical gold and silver has never been greater.

The new gold rush
Bullion dealers are reporting they’re seeing individual purchases every bit as strong as occurred back in 2008. My bullion and coin dealer, JM Bullion, has upwards of a three-week delay in shipping American Silver Eagles, yet dealers everywhere are finding it increasingly difficult to get supply. Buyers from India to China are also racing to scoop up gold, with the China Gold Association reporting retail sales tripling in the country between April 15 and April 16, while Hong Kong and Macau have reported volume surges of as much as 150%.

The continued weakness in pricing is unique because it also comes at a time when supplies are being interrupted. Rio Tinto plc (ADR) (NYSE:RIO) suffered a massive collapse in a wall at its Bingham Canyon copper mine in Utah, which accounts for 5% of total U.S. gold production and 16% of silver. Bingham Canyon is also the world’s biggest copper mine, supplying about 1% of global copper, and is part of the reason I see a coming boom in the red metal.

At the same time, Barrick Gold Corporation (USA) (NYSE:ABX) is facing severe delays in the development of its huge Pascua Lama gold project in Chile, as an appeals court ordered the miner to halt work.