For Vin Diesel’s Riddick, which comes to box offices next weekend, monsters and mercs aren’t a problem. But a boy band? That’s a different story entirely.

According to Google‘s Trends data, Riddick is about neck and neck with the forthcoming biopic One Direction: This Is Us from Sony Corporation (ADR) (NYSE:SNE)‘s TriStar Pictures: 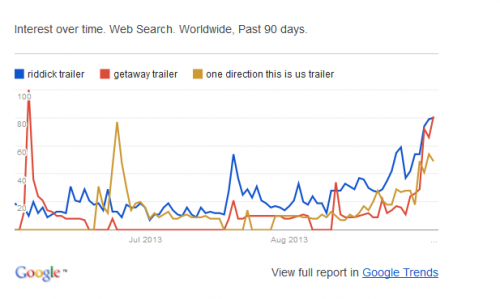 Yet even that may be good news for Comcast Corporation (NASDAQ:CMCSA)‘s Universal Pictures, which lost big on the last film in the Riddick series: 2004’s The Chronicles of Riddick. That film earned just $115.7 million worldwide on a $105 million production budget.

Hollywood economics says a film needs to generate double its production budget in box office ticket sales in order to be profitable. Universal budgeted just $60 million for Riddick, increasing the odds of Comcast Corporation (NASDAQ:CMCSA) earning back its investment this time around.

We’ve seen it happen before. Pitch Black, the first film in the series, earned $53 million on a $23 million budget, Box Office Mojo reports. Low-budget horror films — Riddick is sci-fi horror — tend to produce huge profits for studios such as Lions Gate Entertainment Corp. (USA) (NYSE:LGF), which will distribute Riddick overseas. More than 41,000 surveyed at Rotten Tomatoes say they want to see the film.

Adding Riddick to the blockbuster list seems unlikely. But with a meager budget, a big-name actor in the title role, and plenty of positive buzz, it won’t need to do much to spice up Comcast Corporation (NASDAQ:CMCSA)’s profit party.

The article Will Comcast Profit From “Riddick”? originally appeared on Fool.com and is written by Tim Beyers.

Fool contributor Tim Beyers is a member of the Motley Fool Rule Breakers stock-picking team and the Motley Fool Supernova Odyssey I mission. He owned shares of Google, Netflix, and Time Warner at the time of publication. He was also long January 2014 $50 Netflix call options. Check out Tim’s web home and portfolio holdings or connect with him on Google+, Tumblr, or Twitter, where he goes by @milehighfool. You can also get his insights delivered directly to your RSS reader.The Motley Fool recommends and owns shares of Google and Netflix.