SolarWinds Corporation (SWI): Are Hedge Funds Right About This Stock?

It seems that the masses and most of the financial media hate hedge funds and what they do, but why is this hatred of hedge funds so prominent? At the end of the day, these asset management firms do not gamble the hard-earned money of the people who are on the edge of poverty. Truth be told, most hedge fund managers and other smaller players within this industry are very smart and skilled investors. Of course, they may also make wrong bets in some instances, but no one knows what the future holds and how market participants will react to the bountiful news that floods in each day. The Standard and Poor’s 500 Total Return Index ETFs returned approximately 27.5% in 2019 (through the end of November). Conversely, hedge funds’ top 20 large-cap stock picks generated a return of 37.4% during the same 11-month period, with the majority of these stock picks outperforming the broader market benchmark. Coincidence? It might happen to be so, but it is unlikely. Our research covering the last 18 years indicates that hedge funds’ consensus stock picks generate superior risk-adjusted returns. That’s why we believe it isn’t a waste of time to check out hedge fund sentiment before you invest in a stock like SolarWinds Corporation (NYSE:SWI).

SolarWinds Corporation (NYSE:SWI) investors should pay attention to a decrease in enthusiasm from smart money of late. Our calculations also showed that SWI isn’t among the 30 most popular stocks among hedge funds (click for Q3 rankings and see the video below for Q2 rankings).

If you’d ask most shareholders, hedge funds are seen as worthless, outdated investment tools of years past. While there are more than 8000 funds in operation at the moment, We choose to focus on the masters of this group, about 750 funds. These hedge fund managers control most of all hedge funds’ total capital, and by tracking their top investments, Insider Monkey has determined several investment strategies that have historically exceeded the broader indices. Insider Monkey’s flagship short hedge fund strategy outpaced the S&P 500 short ETFs by around 20 percentage points per annum since its inception in May 2014. Our portfolio of short stocks lost 27.8% since February 2017 (through November 21st) even though the market was up more than 39% during the same period. We just shared a list of 7 short targets in our latest quarterly update .

We leave no stone unturned when looking for the next great investment idea. For example Discover is offering this insane cashback card, so we look into shorting the stock. One of the most bullish analysts in America just put his money where his mouth is. He says, “I’m investing more today than I did back in early 2009.” So we check out his pitch. We read hedge fund investor letters and listen to stock pitches at hedge fund conferences. We even check out this option genius’ weekly trade ideas. This December, we recommended Adams Energy as a one-way bet based on an under-the-radar fund manager’s investor letter and the stock already gained 20 percent. Now we’re going to take a peek at the fresh hedge fund action surrounding SolarWinds Corporation (NYSE:SWI).

What have hedge funds been doing with SolarWinds Corporation (NYSE:SWI)? 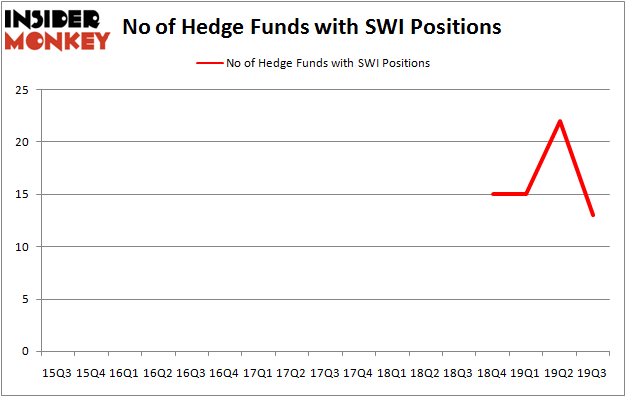 The largest stake in SolarWinds Corporation (NYSE:SWI) was held by Silver Lake Partners, which reported holding $2400.7 million worth of stock at the end of September. It was followed by Sunriver Management with a $45.7 million position. Other investors bullish on the company included Arrowstreet Capital, Selz Capital, and Lunia Capital. In terms of the portfolio weights assigned to each position Silver Lake Partners allocated the biggest weight to SolarWinds Corporation (NYSE:SWI), around 57.94% of its 13F portfolio. Sunriver Management is also relatively very bullish on the stock, dishing out 8.85 percent of its 13F equity portfolio to SWI.

Judging by the fact that SolarWinds Corporation (NYSE:SWI) has experienced bearish sentiment from hedge fund managers, we can see that there lies a certain “tier” of money managers who were dropping their entire stakes by the end of the third quarter. It’s worth mentioning that Anand Parekh’s Alyeska Investment Group said goodbye to the biggest position of the “upper crust” of funds watched by Insider Monkey, worth about $10.3 million in stock. Andrew Feldstein and Stephen Siderow’s fund, Blue Mountain Capital, also cut its stock, about $7.3 million worth. These moves are interesting, as aggregate hedge fund interest dropped by 9 funds by the end of the third quarter.

As you can see these stocks had an average of 17 hedge funds with bullish positions and the average amount invested in these stocks was $313 million. That figure was $2505 million in SWI’s case. Medidata Solutions Inc (NASDAQ:MDSO) is the most popular stock in this table. On the other hand Tata Motors Limited (NYSE:TTM) is the least popular one with only 7 bullish hedge fund positions. SolarWinds Corporation (NYSE:SWI) is not the least popular stock in this group but hedge fund interest is still below average. This is a slightly negative signal and we’d rather spend our time researching stocks that hedge funds are piling on. Our calculations showed that top 20 most popular stocks among hedge funds returned 37.4% in 2019 through the end of November and outperformed the S&P 500 ETF (SPY) by 9.9 percentage points. Unfortunately SWI wasn’t nearly as popular as these 20 stocks (hedge fund sentiment was quite bearish); SWI investors were disappointed as the stock returned 4.8% during the first two months of the fourth quarter and underperformed the market. If you are interested in investing in large cap stocks with huge upside potential, you should check out the top 20 most popular stocks among hedge funds as 70 percent of these stocks already outperformed the market in Q4.

Hedge Funds Are Buying JBG SMITH Properties (JBGS)
Monthly Newsletter Strategy
Download a free copy of our newsletter and see the details inside!
Hedge Fund Resource Center
Related News
Hedge Funds Have Never Been This Bullish On SolarWinds Corporation (SWI) Hedge Funds Have Never Been More Bullish On SolarWinds Corporation (SWI) Chevron, Sprint, Ocular Therapeutix, and More: Why These Stocks Are in the Spotlight Farallon Capital Reveals 4.96% Stake In SolarWinds Inc. (SWI); New Development In Bidding War Between Icahn and Bridgestone For Pep Boys Do Hedge Funds Love SolarWinds Inc (SWI)? What Sparked the Large Moves of These Five Stocks? SolarWinds Inc (SWI)’s Shares Crumble On Lower Revenues, Guidance 11 Companies That Caught Lying To The Public, Deceived Customers 10 Countries with the Highest Coffee Consumption in the World 10 Stocks That Went Up During The 2008 Crash
Billionaire Hedge Funds