Insider Monkey has processed numerous 13F filings of hedge funds and famous investors to create an extensive database of hedge fund holdings. The 13F filings show the hedge funds and investors’ positions as of the end of the second quarter. You can find write-ups about an individual hedge fund’s trades on numerous financial news websites. However, in this article we will take a look at their collective moves and analyze what the smart money thinks of IBM Common Stock (NYSE:IBM) based on that data.

After declining in Q1, hedge fund ownership of IBM Common Stock (NYSE:IBM) remained unchanged in Q2 at 46. IBM shares have plunged by 26% in 2018, with the bulk of those losses coming in the last month. That pushed IBM shares to 8-year lows and lead to a slew of insider trading since October 31, with the company ranking 12th on our list of the The 25 Biggest Insider Purchases in October. That insider buying has persisted into November, and includes CEO Ginny Rometti buying 8,500 shares through a trust. Shareholders have generally been receptive to the company’s purchase of Red Hat but have balked at the 60% premium paid in the $34 billion deal.

Heading into the fourth quarter of 2018, a total of 46 of the hedge funds tracked by Insider Monkey were long this stock, unchanged from one quarter earlier. By comparison, 61 hedge funds held shares or bullish call options in IBM on March 31 2017. With the smart money’s sentiment swirling, there exists an “upper tier” of key hedge fund managers who were upping their holdings meaningfully (or already accumulated large positions). 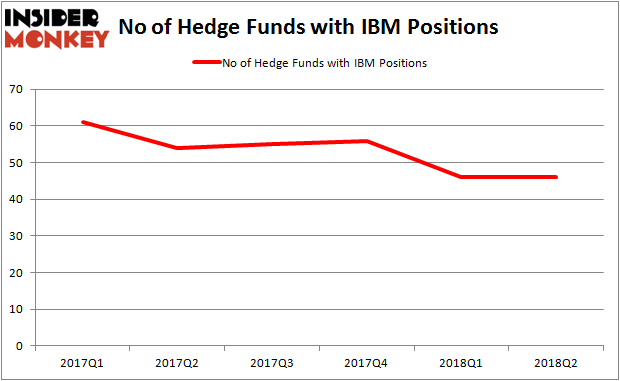 Seeing as IBM Common Stock (NYSE:IBM) has experienced bearish sentiment from the smart money, it’s easy to see that there were a few fund managers that elected to cut their full holdings heading into Q3. It’s worth mentioning that Anand Parekh’s Alyeska Investment Group cut the largest investment of the 700 funds followed by Insider Monkey, worth an estimated $155.3 million in stock, and Rob Citrone’s Discovery Capital Management was right behind this move, as the fund said goodbye to about $59.4 million worth.

As you can see these stocks had an average of 35 hedge funds with bullish positions and the average amount invested in these stocks was $1.88 billion. That figure was $2.05 billion in IBM’s case. McDonald’s Corporation (NYSE:MCD) is the most popular stock in this table. On the other hand BHP Billiton plc (ADR) (NYSE:BBL) is the least popular one with only 14 bullish hedge fund positions. Compared to these stocks International Business Machines Corp. (NYSE:IBM) is more popular among hedge funds. Considering that hedge funds are fond of this stock in relation to its market cap peers, and insiders are also buying up discounted shares, it may be a good idea to analyze IBM further and potentially include it in your portfolio.

Is IBM A Good Investment Right Now? is IBM a good stock to buy NYSE:IBM The 25 Biggest Insider Purchases in October Yahoo Finance