“Market conditions are changing. The continued rise in interest rates suggests we are in the early stages of a bond bear market, which could intensify as central banks withdraw liquidity. The receding tide of liquidity will start to reveal more rocks beyond what has been exposed in emerging markets so far, and the value of a value discipline will be in avoiding the biggest capital-destroying rocks. If a rock emerges on the crowded shore of U.S. momentum, it could result in a major liquidity challenge, as momentum is often most intense on the downside as a crowded trade reverses. So investors are facing a large potential trade-off right now: continue to bet on the current dominance of momentum and the S&P 500, or bet on change and take an active value bet in names with attractive value and optionality, but with negative momentum,” said Clearbridge Investments in its market commentary. We aren’t sure whether long-term interest rates will top 5% and value stocks outperform growth, but we follow hedge fund investor letters to understand where the markets and stocks might be going. This article will lay out and discuss the hedge fund and institutional investor sentiment towards DISH Network Corp. (NASDAQ:DISH).

Hedge fund ownership of DISH Network declined for the third straight quarter in Q2, having fallen by 35% during that time, which also happens to be the amount that DISH shares have lost in 2018. Although just 38 hedge funds tracked by our database were still long DISH on June 30, the wealthiest of those money managers were hanging on to the stock, whose spectrum assets alone could be worth twice the company’s current market cap according to Cowen. DISH ranked 4th on our list of the 25 Stocks Billionaires Are Piling On, as the likes of Ken Griffin’s Citadel Investment (554,686 shares) and Paul Singer’s Elliott Management (2.99 million shares) grew even more bullish during Q2.

According to most investors, hedge funds are viewed as worthless, old financial tools of the past. While there are over 8,000 funds in operation at the moment, our experts look at the aristocrats of this club, about 700 funds. It is estimated that this group of investors command the lion’s share of all hedge funds’ total asset base, and by tracking their top equity investments, Insider Monkey has discovered numerous investment strategies that have historically beaten the S&P 500 index. Insider Monkey’s small-cap hedge fund strategy outstripped the S&P 500 index by 12 percentage points annually for a decade in their back tests. 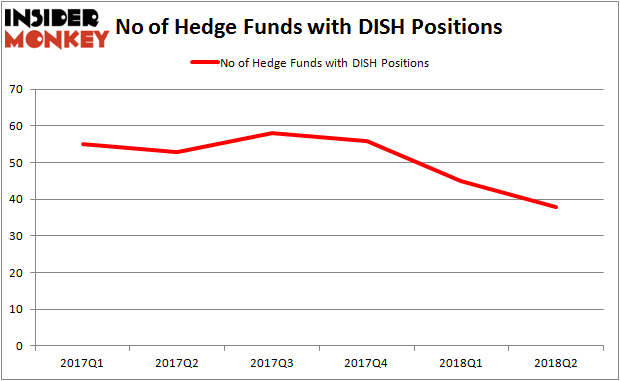 The largest stake in DISH Network Corp. (NASDAQ:DISH) was held by Boykin Curry’s Eagle Capital Management, which reported holding $665.9 million worth of the stock as of the end of June. It was followed by Paulson & Co with a $167.2 million position. Other investors bullish on the company included Key Square Capital Management and Altalis Capital Partners.

Because DISH Network Corp. (NASDAQ:DISH) has witnessed declining sentiment from the entirety of the hedge funds we track, we can see that there was a specific group of money managers that slashed their entire stakes heading into Q3. At the top of the heap, Michael Hintze’s CQS Cayman LP cut the biggest position of the “upper crust” of funds followed by Insider Monkey, comprising about $23.9 million in stock. John Brennan’s fund, Sirios Capital Management, also dropped its stock, about $20.6 million worth. These bearish behaviors are important to note, as total hedge fund interest dropped by 7 funds heading into Q3.

As you can see these stocks had an average of 21 hedge funds with bullish positions and the average amount invested in these stocks was $634 million. That figure was $1.65 billion in DISH’s case. Comerica Incorporated (NYSE:CMA) is the most popular stock in this table. On the other hand Telecom Italia S.p.A. (ADR) (NYSE:TI) is the least popular one with only 4 bullish hedge fund positions. DISH Network Corp. (NASDAQ:DISH) is not the most popular stock in this group but hedge fund interest is still above average. This is a slightly positive signal but, but given the persistently declining smart money ownership, we’d rather spend our time researching stocks that hedge funds are piling on. In this regard CMA might be a better candidate to consider a long position.