Concerns over rising interest rates and expected further rate increases have hit several stocks hard since the end of the third quarter. The NASDAQ and Russell 2000 indices are already in correction territory. More importantly, the Russell 2000 ETF (IWM) underperformed the larger S&P 500 ETF (SPY) by about 4 percentage points in October. Hedge funds and institutional investors tracked by Insider Monkey usually invest a disproportionate amount of their portfolios in smaller cap stocks. We have been receiving indications that hedge funds were paring back their overall exposure and this is one of the factors behind the recent movements in major indices. In this article, we will take a closer look at hedge fund sentiment towards Wal-Mart Stores, Inc. (NYSE:WMT).

Hedge fund ownership of Wal-Mart Stores, Inc. (NYSE:WMT) has switch course during each of the past 4 quarters, with hedge funds again buying into Walmart in Q2. Walmart ranked 15th among Billionaire Ken Fisher’s Top Stock Picks Heading Into 2019, as Fisher Investments owned 9.93 million shares. The investment adviser owned Walmart throughout its decade-plus drought on the stock market between August 1999 and August 2011, and has finally enjoyed the benefit of some decent returns in recent years.

Today there are tons of formulas stock traders put to use to grade their holdings. A duo of the best formulas are hedge fund and insider trading indicators. Our experts have shown that, historically, those who follow the best picks of the best money managers can trounce the broader indices by a very impressive amount (see the details here).

What does the smart money think about Wal-Mart Stores, Inc. (NYSE:WMT)? 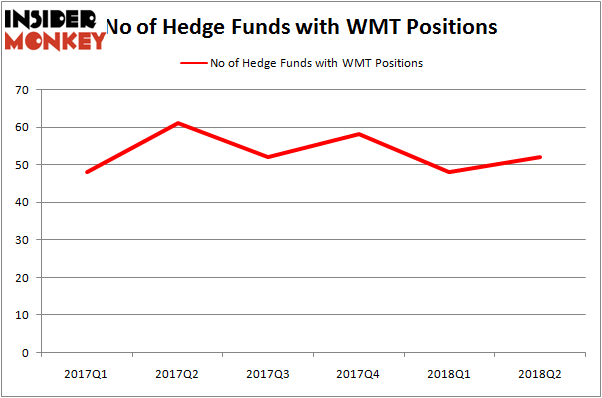 With general bullishness amongst the heavyweights, specific money managers have jumped into Wal-Mart Stores, Inc. (NYSE:WMT) headfirst. Moon Capital, managed by John W. Moon, established the most outsized position in Wal-Mart Stores, Inc. (NYSE:WMT). Moon Capital had $18.2 million invested in the company at the end of the quarter. Alexander Mitchell’s Scopus Asset Management also made a $128.5 million investment in the stock during the quarter. The other funds with brand new WMT positions are Nick Niell’s Arrowgrass Capital Partners, Gregg Moskowitz’s Interval Partners, and Paul Marshall and Ian Wace’s Marshall Wace LLP.

As you can see these stocks had an average of 54 hedge funds with bullish positions and the average amount invested in these stocks was $3.36 billion. That figure was $4.40 billion in WMT’s case. AT&T Inc. (NYSE:T) is the most popular stock in this table. On the other hand Nestle SA Reg Shs. Ser. B Spons (ADR) (OTCMKTS:NSRGY) is the least popular one with only 5 bullish hedge fund positions. Wal-Mart Stores, Inc. (NYSE:WMT) is not the least popular stock in this group but hedge fund interest is still below average and hedge funds remain indecisive on Walmart’s long-term strength. This is a slightly negative signal and we’d rather spend our time researching stocks that hedge funds are piling on. In this regard T might be a better candidate to consider a long position.