There are several ways to beat the market, and investing in small cap stocks has historically been one of them. We like to improve the odds of beating the market further by examining what famous hedge fund operators such as Jeff Ubben, George Soros and Carl Icahn think. Those hedge fund operators make billions of dollars each year by hiring the best and the brightest to do research on stocks, including small cap stocks that big brokerage houses simply don’t cover. Because of Carl Icahn and other elite funds’ exemplary historical records, we pay attention to their small cap picks. In this article, we use hedge fund filing data to analyze SiteOne Landscape Supply, Inc. (NYSE:SITE).

SiteOne Landscape Supply, Inc. (NYSE:SITE) shares haven’t seen a lot of action during the second quarter. Overall, hedge fund sentiment was unchanged. The stock was in 12 hedge funds’ portfolios at the end of the second quarter of 2019. The level and the change in hedge fund popularity aren’t the only variables you need to analyze to decipher hedge funds’ perspectives. A stock may witness a boost in popularity but it may still be less popular than similarly priced stocks. That’s why at the end of this article we will examine companies such as TC Pipelines, LP (NYSE:TCP), Cimpress NV (NASDAQ:CMPR), and Brooks Automation, Inc. (NASDAQ:BRKS) to gather more data points. Our calculations also showed that SITE isn’t among the 30 most popular stocks among hedge funds (see the video below).

Heading into the third quarter of 2019, a total of 12 of the hedge funds tracked by Insider Monkey were long this stock, a change of 0% from the first quarter of 2019. Below, you can check out the change in hedge fund sentiment towards SITE over the last 16 quarters. With the smart money’s positions undergoing their usual ebb and flow, there exists an “upper tier” of noteworthy hedge fund managers who were upping their holdings significantly (or already accumulated large positions). 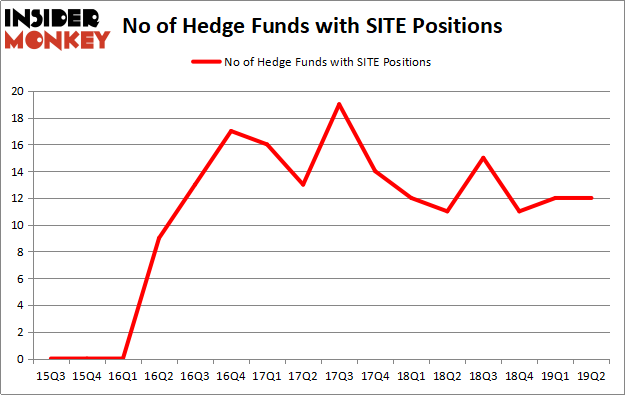 More specifically, Greenhouse Funds was the largest shareholder of SiteOne Landscape Supply, Inc. (NYSE:SITE), with a stake worth $18.6 million reported as of the end of March. Trailing Greenhouse Funds was Carlson Capital, which amassed a stake valued at $8 million. Lionstone Capital Management, Citadel Investment Group, and Royce & Associates were also very fond of the stock, giving the stock large weights in their portfolios.

Judging by the fact that SiteOne Landscape Supply, Inc. (NYSE:SITE) has experienced a decline in interest from the smart money, it’s easy to see that there were a few money managers who were dropping their positions entirely heading into Q3. Interestingly, Noam Gottesman’s GLG Partners dropped the largest investment of all the hedgies watched by Insider Monkey, worth close to $3.3 million in stock, and Curtis Schenker and Craig Effron’s Scoggin was right behind this move, as the fund dropped about $2.6 million worth. These bearish behaviors are important to note, as aggregate hedge fund interest stayed the same (this is a bearish signal in our experience).

As you can see these stocks had an average of 13.75 hedge funds with bullish positions and the average amount invested in these stocks was $230 million. That figure was $40 million in SITE’s case. Valmont Industries, Inc. (NYSE:VMI) is the most popular stock in this table. On the other hand TC Pipelines, LP (NYSE:TCP) is the least popular one with only 5 bullish hedge fund positions. SiteOne Landscape Supply, Inc. (NYSE:SITE) is not the least popular stock in this group but hedge fund interest is still below average. Our calculations showed that top 20 most popular stocks among hedge funds returned 24.4% in 2019 through September 30th and outperformed the S&P 500 ETF (SPY) by 4 percentage points. A small number of hedge funds were also right about betting on SITE as the stock returned 6.8% during the same time frame and outperformed the market by an even larger margin.