Sinclair Broadcast Group, Inc. (SBGI): Are Hedge Funds Right to Give Up On It?

Insider Monkey finished processing more than 700 13F filings made by hedge funds and prominent investors. These filings show these funds’ portfolio positions as of September 30. What do these smart investors think about Sinclair Broadcast Group, Inc. (NASDAQ:SBGI)?

Hedge funds remained bearish on Sinclair Broadcast Group, Inc. (NASDAQ:SBGI) for a third-straight quarter in Q3, as there was a net decline in the number of shareholders of the stock, which has fallen by 31% in 2018. Jay Petschek and Steven Major’s Corsair Capital Management was one of the hedge funds that bailed on SBGI over the past few quarters, a decision which it explained in its Q2 investor letter:

“Sinclair Broadcasting Group (‘SBGI’), which actually rose very slightly during the quarter, was a detractor for the fund. In early Q2, rumors persisted that “core” ads were not rebounding as sharply as hoped after a challenging Q1, sending broadcasting stocks lower. Then, in early May, SBGI rallied on stronger than expected divestiture proceeds associated with its proposed acquisition of Tribune Media (“TRCO”). We exited our position in SBGI during Q2 given a) the greater than expected softness in “core” advertising which looks to be a continued headwind and b) the increasingly lengthy regulatory approval process that is now subject to seemingly unending political pressures. While we still believe that the broadcast business, with its steady retransmission fees and its spectrum optionality, is misunderstood, we don’t see a catalyst for meaningful re-rating, especially given the worse than expected ad environment. Last week’s FCC vote to send the proposed SBGI/TRCO merger to a hearing process has now put the broader deal in jeopardy, reflective of what has been a much more trying approval process than we initially underwrote. SBGI closed the quarter at $32.15,” Corsair Capital Management wrote.

In the eyes of most investors, hedge funds are perceived as worthless, outdated investment vehicles of years past. While there are greater than 8,000 funds trading at the moment, our researchers choose to focus on the masters of this group, around 700 funds. These hedge fund managers manage most of the hedge fund industry’s total asset base, and by watching their top investments, Insider Monkey has determined numerous investment strategies that have historically surpassed the broader indices. Insider Monkey’s flagship hedge fund strategy outstripped the S&P 500 index by 6 percentage points annually since its inception in May 2014 through early November 2018. We were able to generate large returns even by identifying short candidates. Our portfolio of short stocks lost 26.1% since February 2017 even though the market was up nearly 19% during the same period. We just shared a list of 11 short targets in our latest quarterly update.

What does the smart money think about Sinclair Broadcast Group, Inc. (NASDAQ:SBGI)? 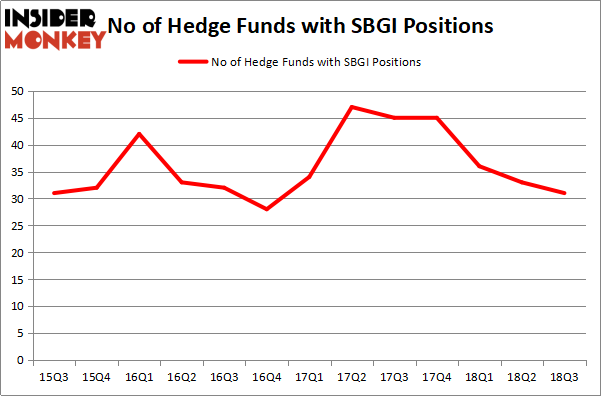 Judging by the fact that Sinclair Broadcast Group, Inc. (NASDAQ:SBGI) has experienced a decline in interest from the aggregate hedge fund industry, logic holds that there exists a select few money managers that elected to cut their full holdings heading into Q3. Interestingly, Matthew Sidman’s Three Bays Capital dropped the largest position of the “upper crust” of funds monitored by Insider Monkey, valued at an estimated $80.2 million in stock, and Kenneth Mario Garschina’s Mason Capital Management was right behind this move, as the fund sold off about $54.5 million worth. These moves are interesting, as aggregate hedge fund interest dropped by 2 funds heading into Q3.

As you can see these stocks had an average of 18 hedge funds with bullish positions and the average amount invested in these stocks was $358 million. That figure was $568 million in SBGI’s case. Orbotech Ltd. (NASDAQ:ORBK) is the most popular stock in this table. On the other hand The RMR Group Inc. (NASDAQ:RMR) is the least popular one with only 9 bullish hedge fund positions. Compared to these stocks Sinclair Broadcast Group, Inc. (NASDAQ:SBGI) is more popular among hedge funds. However, we would like to see hedge fund ownership stabilize before we consider a long position in this stock.

Collegium Pharmaceutical, Inc. (NASDAQ:COLL): Are Hedge Funds Right About This...
Monthly Newsletter Strategy
Download a free copy of our newsletter and see the details inside!
Hedge Fund Resource Center
Related News
35 Fresh Stories That You Should Read To Know How The Financial Markets Are Doing Today Is Sinclair Broadcast Group Inc. (SBGI) A Good Stock To Buy? Market Doesn’t Appreciate How Cyclical Apple (AAPL) Is: Nishkama Capital Talks about Its Investments This Stock Has Gained Over 700% Today, Plus the Latest on GoPro, Petrobras and Sinclair Why Are So Many Hedge Funds Long Sinclair Broadcast Group (SBGI)? Today’s Trending Stocks: Time Warner Inc, Sinclair Broadcast, Zoetis, and 2 More Are Insiders Selling These 3 High-Potential Stocks Too Early? 5 Most Socially Responsible Companies in America 5 Ways You Can Eliminate Credit Card Debt 10 Easiest Road Test Sites in NY and NJ
Billionaire Hedge Funds