Concerns over rising interest rates and expected further rate increases have hit several stocks hard since the end of the third quarter. The NASDAQ and Russell 2000 indices are already in correction territory. More importantly, the Russell 2000 ETF (IWM) underperformed the larger S&P 500 ETF (SPY) by about 4 percentage points in October. Hedge funds and institutional investors tracked by Insider Monkey usually invest a disproportionate amount of their portfolios in smaller cap stocks. We have been receiving indications that hedge funds were paring back their overall exposure and this is one of the factors behind the recent movements in major indices. In this article, we will take a closer look at hedge fund sentiment towards TOTAL S.A. (ADR) (NYSE:TOT).

Hedge fund ownership of TOTAL S.A. (ADR) (NYSE:TOT) ticked up in Q2, but the smart money remained vastly underweight the stock. However, Total S.A. landed 13th among Billionaire Ken Fisher’s Top Stock Picks Heading Into 2019, as Fisher Investments owned 16.29 million shares. Fisher added the stock to its 13F portfolio in the first quarter of this year but bought most of the shares during Q3.

At the moment there are dozens of signals investors can use to size up their stock investments. A pair of the most underrated signals are hedge fund and insider trading sentiment. We have shown that, historically, those who follow the top picks of the top fund managers can outclass their index-focused peers by a very impressive margin (see the details here).

What have hedge funds been doing with TOTAL S.A. (ADR) (NYSE:TOT)?

At the end of the third quarter, a total of 13 of the hedge funds tracked by Insider Monkey held long positions in this stock, a rise of 8% from the previous quarter. On the other hand, there were a total of 13 hedge funds with a bullish position in TOT at the beginning of this year. With hedgies’ sentiment swirling, there exists an “upper tier” of noteworthy hedge fund managers who were upping their stakes significantly (or already accumulated large positions). 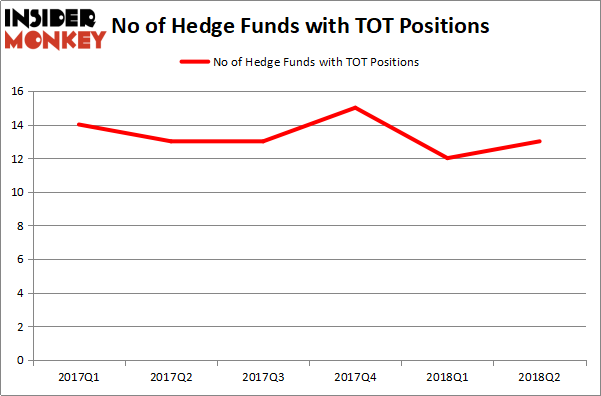 Among these funds, Ken Fisher’s Fisher Asset Management held the most valuable stake in TOTAL S.A. (ADR) (NYSE:TOT), which was worth $31.9 million at the end of the second quarter. On the second spot was Seminole Capital (Investment Mgmt) which amassed $13.7 million worth of shares. Moreover, P.A.W. CAPITAL PARTNERS, Bourgeon Capital, and Ionic Capital Management were also bullish on TOTAL S.A. (ADR) (NYSE:TOT), allocating a large percentage of their portfolios to this stock.

As industry-wide interest jumped, key money managers have jumped into TOTAL S.A. (ADR) (NYSE:TOT) headfirst. Ionic Capital Management, managed by Bart Baum, created the most valuable call position in TOTAL S.A. (ADR) (NYSE:TOT). Ionic Capital Management had $3 million invested in the company at the end of the quarter. Thomas Bailard’s Bailard Inc also made a $0.2 million investment in the stock during the quarter. The only other fund with a new position in the stock is David Costen Haley’s HBK Investments.

As you can see these stocks had an average of 46 hedge funds with bullish positions and the average amount invested in these stocks was $3.70 billion. That figure was a putrid $78 million in TOT’s case. DowDuPont Inc. (NYSE:DWDP) is the most popular stock in this table. On the other hand Unilever N.V. (ADR) (NYSE:UN) is the least popular one with only 14 bullish hedge fund positions. Compared to these stocks TOTAL S.A. (ADR) (NYSE:TOT) is even less popular than UN. Considering that hedge funds aren’t fond of this stock in relation to other companies analyzed in this article, it may be a good idea to analyze it in detail and understand why the smart money isn’t behind this stock.

Hedge Funds Like What’s on the Menu at Darden Restaurants (DRI)
Monthly Newsletter Strategy
Download a free copy of our newsletter and see the details inside!
Hedge Fund Resource Center
Related News
Is Total SA (ADR) (TOT) A Better Stock Than Its Peers? 5 Ways You Can Eliminate Credit Card Debt 10 Easiest Road Test Sites in NY and NJ 10 Hottest Selling Products in the USA in 2018
Billionaire Hedge Funds