While the market driven by short-term sentiment influenced by uncertainty regarding the future of the interest rate environment in the US, declining oil prices and the trade war with China, many smart money investors are keeping their optimism regarding the current bull run, while still hedging many of their long positions. However, as we know, big investors usually buy stocks with strong fundamentals, which is why we believe we can profit from imitating them. In this article, we are going to take a look at the smart money sentiment surrounding WPX Energy Inc (NYSE:WPX).

WPX Energy Inc (NYSE:WPX) was in 53 hedge funds’ portfolios at the end of the third quarter of 2018. WPX has seen an increase in hedge fund interest in recent months. There were 40 hedge funds in our database with WPX positions at the end of the previous quarter. Our calculations also showed that WPX isn’t among the 30 most popular stocks among hedge funds.

What have hedge funds been doing with WPX Energy Inc (NYSE:WPX)?

At Q3’s end, a total of 53 of the hedge funds tracked by Insider Monkey were bullish on this stock, a change of 33% from the previous quarter. By comparison, 37 hedge funds held shares or bullish call options in WPX heading into this year. With hedgies’ capital changing hands, there exists an “upper tier” of noteworthy hedge fund managers who were boosting their holdings significantly (or already accumulated large positions). 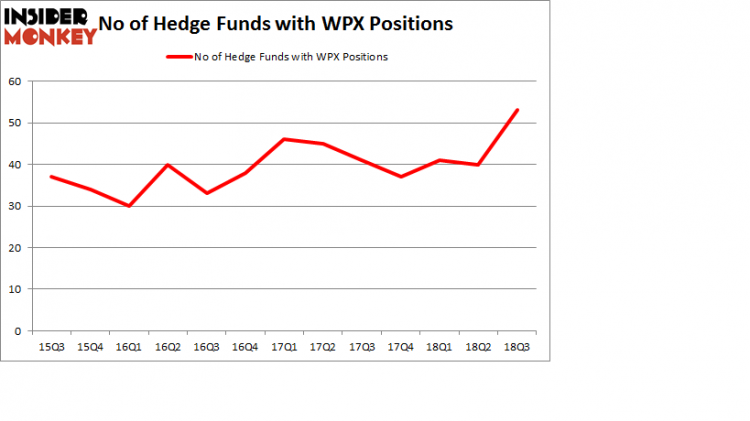 The largest stake in WPX Energy Inc (NYSE:WPX) was held by Citadel Investment Group, which reported holding $207.2 million worth of stock at the end of September. It was followed by Millennium Management with a $180.8 million position. Other investors bullish on the company included Brenham Capital Management, Adage Capital Management, and Omega Advisors.

As aggregate interest increased, specific money managers have been driving this bullishness. Viking Global, managed by Andreas Halvorsen, established the most valuable position in WPX Energy Inc (NYSE:WPX). Viking Global had $68.7 million invested in the company at the end of the quarter. Dan Loeb’s Third Point also made a $63.1 million investment in the stock during the quarter. The other funds with brand new WPX positions are Bernard Selz’s Selz Capital, Robert B. Gillam’s McKinley Capital Management, and Amy Minella’s Cardinal Capital.

As you can see these stocks had an average of 28.5 hedge funds with bullish positions and the average amount invested in these stocks was $1.24 billion. That figure was $1.25 billion in WPX’s case. ServiceMaster Global Holdings Inc (NYSE:SERV) is the most popular stock in this table. On the other hand SL Green Realty Corp (NYSE:SLG) is the least popular one with only 18 bullish hedge fund positions. Compared to these stocks WPX Energy Inc (NYSE:WPX) is more popular among hedge funds. Considering that hedge funds are fond of this stock in relation to its market cap peers, it may be a good idea to analyze it in detail and potentially include it in your portfolio.