Earlier this year, many hedge funds were holding a larger percentage of their assets in cash than at any other time in recent memory, as fears that the market was due for a correction abounded. This led to many small-cap stocks being hit hard, as hedge funds, which tend to be some of their staunchest backers, liquidated their holdings. Now however, hedge funds appear to be growing more confident and putting their money back into equities, which has led to small-cap stocks taking off, with the Russell 2000 ETF (IWM) having outperformed the S&P 500 ETF (SPY) by more than 10 percentage points since the end of June. In this article, we’ll see how this large shift in hedge fund activity impacted White Mountains Insurance Group Ltd (NYSE:WTM).

White Mountains Insurance Group Ltd (NYSE:WTM) was included in the equity portfolios of 12 hedge funds from our database at the end of September. WTM investors should be aware of an increase in enthusiasm from smart money last quarter. There had been 11 funds with WTM holdings at the end of the previous quarter. At the end of this article we will also compare WTM to other stocks including Credit Acceptance Corp. (NASDAQ:CACC), Yamana Gold Inc. (USA) (NYSE:AUY), and Techne Corporation (NASDAQ:TECH) to get a better sense of its popularity.

What does the smart money think about White Mountains Insurance Group Ltd (NYSE:WTM)?

Heading into the fourth quarter of 2016, a total of 12 of the hedge funds tracked by Insider Monkey were bullish on this stock, up by 9% from the previous quarter. Below, you can check out the change in hedge fund sentiment towards WTM over the last five quarters. So, let’s examine which hedge funds were among the top holders of the stock and which hedge funds were making big moves. 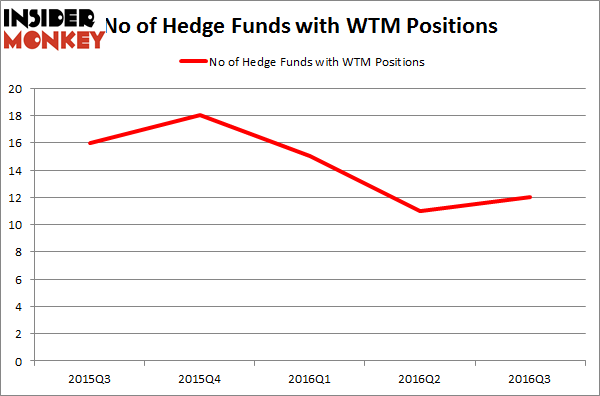 When looking at the institutional investors followed by Insider Monkey, Scott Wallace’s Wallace Capital Management has the biggest position in White Mountains Insurance Group Ltd (NYSE:WTM), worth close to $59.4 million, comprising 10.4% of its total 13F portfolio. Coming in second is Third Avenue Management, led by Martin Whitman, which holds a $54.9 million position; the fund has 2.5% of its 13F portfolio invested in the stock. Other members of the smart money that are bullish comprise Alan S. Parsow’s Elkhorn Partners, Cliff Asness’ AQR Capital Management, and Renaissance Technologies, one of the largest hedge funds in the world. We should note that none of these hedge funds are among our list of the 100 best performing hedge funds which is based on the performance of their 13F long positions in non-microcap stocks.