Should You Buy The Southern Company (SO)?

It was a rough fourth quarter for many hedge funds, which were naturally unable to overcome the big dip in the broad market, as the S&P 500 fell by about 7% during October and average hedge fund losing about 3%. The Russell 2000, composed of smaller companies, performed even worse, trailing the S&P by about 4 percentage points during the first half of Q4, as investors fled less-known quantities for safe havens. This was the case with hedge funds, who we heard were pulling money from the market amid the volatility, which included money from small-cap stocks, which they invest in at a higher rate than other investors. This action contributed to the greater decline in these stocks during the tumultuous period. We will study how this market volatility affected their sentiment towards The Southern Company (NYSE:SO) during the quarter below.

The Southern Company (NYSE:SO) has experienced an increase in activity from the world’s largest hedge funds in recent months. Our calculations also showed that SO isn’t among the 30 most popular stocks among hedge funds.

What does the smart money think about The Southern Company (NYSE:SO)? 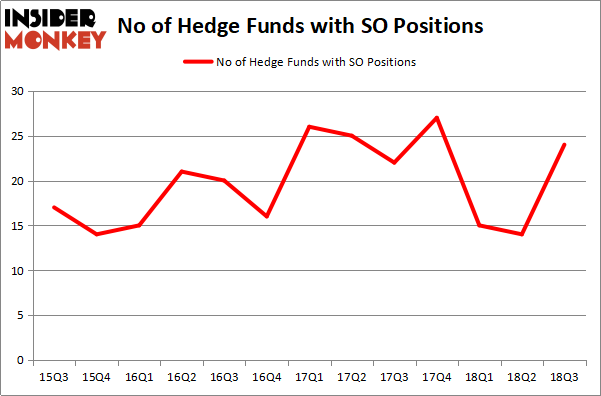 According to publicly available hedge fund and institutional investor holdings data compiled by Insider Monkey, Renaissance Technologies, managed by Jim Simons, holds the biggest position in The Southern Company (NYSE:SO). Renaissance Technologies has a $209.8 million position in the stock, comprising 0.2% of its 13F portfolio. Coming in second is Zimmer Partners, managed by Stuart J. Zimmer, which holds a $63.2 million position; the fund has 0.8% of its 13F portfolio invested in the stock. Other peers with similar optimism encompass Israel Englander’s Millennium Management, Cliff Asness’s AQR Capital Management and John W. Rogers’s Ariel Investments.

As industrywide interest jumped, some big names were leading the bulls’ herd. Zimmer Partners, managed by Stuart J. Zimmer, established the biggest position in The Southern Company (NYSE:SO). Zimmer Partners had $63.2 million invested in the company at the end of the quarter. Israel Englander’s Millennium Management also made a $43.6 million investment in the stock during the quarter. The following funds were also among the new SO investors: Jonathan Barrett and Paul Segal’s Luminus Management, Dmitry Balyasny’s Balyasny Asset Management, and D. E. Shaw’s D E Shaw.

As you can see these stocks had an average of 32 hedge funds with bullish positions and the average amount invested in these stocks was $1.81 billion. That figure was $498 million in SO’s case. Zoetis Inc (NYSE:ZTS) is the most popular stock in this table. On the other hand Brookfield Asset Management Inc. (NYSE:BAM) is the least popular one with only 21 bullish hedge fund positions. The Southern Company (NYSE:SO) is not the least popular stock in this group but hedge fund interest is still below average. This is a slightly negative signal and we’d rather spend our time researching stocks that hedge funds are piling on. In this regard ZTS might be a better candidate to consider a long position.

Incandescent Capital Gives Its View on Heritage Insurance
Monthly Newsletter Strategy
Download a free copy of our newsletter and see the details inside!
Hedge Fund Resource Center
Related News
50 Best Utility Dividend Stocks To Invest In 3 Utility Stocks That Will Pay You To Invest In Them Is Southern Co (SO) A Good Stock To Buy? Scout Daily Update: Dallas Fed Down 22 Straight Months Which Is the Better Valuation Metric? The P/E Ratio or the PEG Ratio: Part 1 10 Stocks That Had Their Price Targets Raised Tuesday Duquesne Family Office Goes On a Buying Spree The 10 Best Islands to Visit in 2019 5 Most Socially Responsible Companies in America 5 Ways You Can Eliminate Credit Card Debt
Billionaire Hedge Funds