Should You Buy The J.M. Smucker Company (SJM)?

Many investors, including Paul Tudor Jones or Stan Druckenmiller, have been saying for a while now that the current market is overvalued due to a low interest rate environment that leads to companies swapping their equity for debt and focusing mostly on short-term performance such as beating the quarterly earnings estimates. In the fourth quarter, many investors lost money due to unpredictable events such as the sudden increase in long-term interest rates and unintended consequences of the trade war with China. Nevertheless, many of the stocks that tanked in the third quarter still sport strong fundamentals and their decline was more related to the general market sentiment rather than their individual performance and hedge funds kept their bullish stance. In this article we will find out how hedge fund sentiment to The J.M. Smucker Company (NYSE:SJM) changed recently.

The J.M. Smucker Company (NYSE:SJM) shareholders have witnessed an increase in hedge fund sentiment in recent months. Our calculations also showed that sjm isn’t among the 30 most popular stocks among hedge funds.

In today’s marketplace there are a multitude of formulas stock traders use to size up publicly traded companies. A couple of the most under-the-radar formulas are hedge fund and insider trading indicators. Our experts have shown that, historically, those who follow the best picks of the best investment managers can outpace the market by a very impressive margin (see the details here).

What does the smart money think about The J.M. Smucker Company (NYSE:SJM)?

Heading into the fourth quarter of 2018, a total of 26 of the hedge funds tracked by Insider Monkey were long this stock, a change of 13% from the previous quarter. Below, you can check out the change in hedge fund sentiment towards SJM over the last 13 quarters. So, let’s find out which hedge funds were among the top holders of the stock and which hedge funds were making big moves. 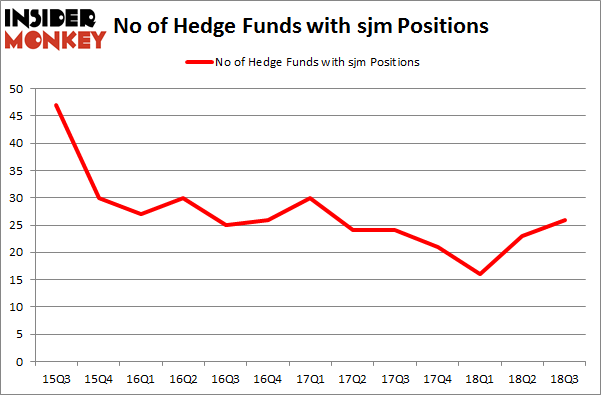 More specifically, Ariel Investments was the largest shareholder of The J.M. Smucker Company (NYSE:SJM), with a stake worth $180.8 million reported as of the end of September. Trailing Ariel Investments was Armistice Capital, which amassed a stake valued at $52.9 million. Polaris Capital Management, Millennium Management, and Echo Street Capital Management were also very fond of the stock, giving the stock large weights in their portfolios.

As industrywide interest jumped, key money managers were leading the bulls’ herd. Millennium Management, managed by Israel Englander, initiated the most outsized call position in The J.M. Smucker Company (NYSE:SJM). Millennium Management had $5.3 million invested in the company at the end of the quarter. Mark Kingdon’s Kingdon Capital also initiated a $3.2 million position during the quarter. The other funds with brand new SJM positions are Charles Davidson and Joseph Jacobs’s Wexford Capital, Benjamin A. Smith’s Laurion Capital Management, and George Hall’s Clinton Group.

Let’s check out hedge fund activity in other stocks – not necessarily in the same industry as The J.M. Smucker Company (NYSE:SJM) but similarly valued. We will take a look at New Oriental Education & Technology Group Inc. (NYSE:EDU), Franco-Nevada Corporation (NYSE:FNV), Kansas City Southern (NYSE:KSU), and IDEX Corporation (NYSE:IEX). This group of stocks’ market valuations are similar to SJM’s market valuation.

As you can see these stocks had an average of 22 hedge funds with bullish positions and the average amount invested in these stocks was $500 million. That figure was $428 million in SJM’s case. New Oriental Education & Tech Group Inc. (NYSE:EDU) is the most popular stock in this table. On the other hand Franco-Nevada Corporation (NYSE:FNV) is the least popular one with only 16 bullish hedge fund positions. Compared to these stocks The J.M. Smucker Company (NYSE:SJM) is more popular among hedge funds. Considering that hedge funds are fond of this stock in relation to its market cap peers, it may be a good idea to analyze it in detail and potentially include it in your portfolio.