The Boeing Company (NYSE:BA) has seen an increase in hedge fund sentiment recently. BA was in 67 hedge funds’ portfolios at the end of December. There were 53 hedge funds in our database with BA holdings at the end of the previous quarter. Our calculations also showed that BA isn’t among the 30 most popular stocks among hedge funds.

If you’d ask most stock holders, hedge funds are perceived as underperforming, old financial vehicles of yesteryear. While there are more than 8000 funds in operation today, Our researchers look at the moguls of this group, about 750 funds. Most estimates calculate that this group of people have their hands on the majority of all hedge funds’ total capital, and by monitoring their top equity investments, Insider Monkey has deciphered various investment strategies that have historically defeated the S&P 500 index. Insider Monkey’s flagship hedge fund strategy outpaced the S&P 500 index by nearly 5 percentage points a year since its inception in May 2014 through early November 2018. We were able to generate large returns even by identifying short candidates. Our portfolio of short stocks lost 27.5% since February 2017 (through March 12th) even though the market was up nearly 25% during the same period. We just shared a list of 6 short targets in our latest quarterly update and they are already down an average of 6% in less than a month.

At Q4’s end, a total of 67 of the hedge funds tracked by Insider Monkey held long positions in this stock, a change of 26% from the previous quarter. On the other hand, there were a total of 57 hedge funds with a bullish position in BA a year ago. With hedge funds’ positions undergoing their usual ebb and flow, there exists an “upper tier” of noteworthy hedge fund managers who were boosting their stakes considerably (or already accumulated large positions). 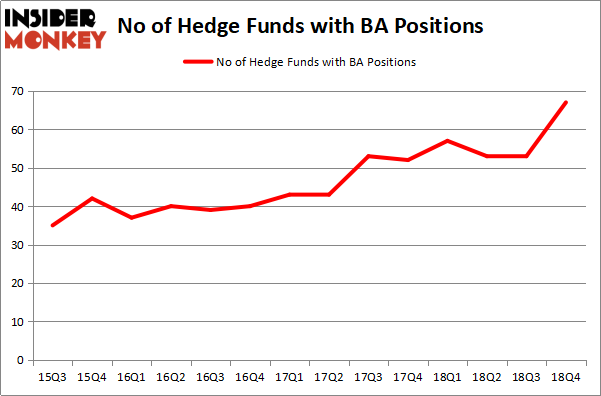 The largest stake in The Boeing Company (NYSE:BA) was held by AQR Capital Management, which reported holding $648.9 million worth of stock at the end of September. It was followed by Citadel Investment Group with a $549.6 million position. Other investors bullish on the company included Two Sigma Advisors, Adage Capital Management, and Arrowstreet Capital.

As industrywide interest jumped, some big names were leading the bulls’ herd. Holocene Advisors, managed by Brandon Haley, created the most outsized call position in The Boeing Company (NYSE:BA). Holocene Advisors had $193.5 million invested in the company at the end of the quarter. Andreas Halvorsen’s Viking Global also made a $179.6 million investment in the stock during the quarter. The other funds with brand new BA positions are Daniel Sundheim’s D1 Capital Partners, Andrew Immerman and Jeremy Schiffman’s Palestra Capital Management, and John Smith Clark’s Southpoint Capital Advisors.

Let’s go over hedge fund activity in other stocks – not necessarily in the same industry as The Boeing Company (NYSE:BA) but similarly valued. We will take a look at Toyota Motor Corporation (NYSE:TM), HSBC Holdings plc (NYSE:HSBC), The Walt Disney Company (NYSE:DIS), and Oracle Corporation (NYSE:ORCL). All of these stocks’ market caps are closest to BA’s market cap.

As you can see these stocks had an average of 36 hedge funds with bullish positions and the average amount invested in these stocks was $2579 million. That figure was $4052 million in BA’s case. The Walt Disney Company (NYSE:DIS) is the most popular stock in this table. On the other hand Toyota Motor Corporation (NYSE:TM) is the least popular one with only 8 bullish hedge fund positions. The Boeing Company (NYSE:BA) is not the most popular stock in this group but hedge fund interest is still above average. Our calculations showed that top 15 most popular stocks among hedge funds returned 19.7% through March 15th and outperformed the S&P 500 ETF (SPY) by 6.6 percentage points. Hedge funds were also right about betting on Boeing as the stock returned 18.1% and outperformed the market as well.