It is already common knowledge that individual investors do not usually have the necessary resources and abilities to properly research an investment opportunity. As a result, most investors pick their illusory “winners” by making a superficial analysis and research that leads to poor performance on aggregate. Since stock returns aren’t usually symmetrically distributed and index returns are more affected by a few outlier stocks (i.e. the FAANG stocks dominating and driving S&P 500 Index’s returns in recent years), more than 50% of the constituents of the Standard and Poor’s 500 Index underperform the benchmark. Hence, if you randomly pick a stock, there is more than 50% chance that you’d fail to beat the market. At the same time, the 30 most favored S&P 500 stocks by the hedge funds monitored by Insider Monkey generated a return of 15.1% over the last 12 months (vs. 5.6% gain for SPY), with 53% of these stocks outperforming the benchmark. Of course, hedge funds do make wrong bets on some occasions and these get disproportionately publicized on financial media, but piggybacking their moves can beat the broader market on average. That’s why we are going to go over recent hedge fund activity in Rio Tinto plc (NYSE:RIO).

Hedge fund interest in Rio Tinto plc (NYSE:RIO) shares was flat at the end of last quarter. This is usually a negative indicator. The level and the change in hedge fund popularity aren’t the only variables you need to analyze to decipher hedge funds’ perspectives. A stock may witness a boost in popularity but it may still be less popular than similarly priced stocks. That’s why at the end of this article we will examine companies such as Diageo plc (NYSE:DEO), U.S. Bancorp (NYSE:USB), and HDFC Bank Limited (NYSE:HDB) to gather more data points.

At the end of the third quarter, a total of 20 of the hedge funds tracked by Insider Monkey were bullish on this stock, representing no change from the second quarter of 2018. Below, you can check out the change in hedge fund sentiment towards RIO over the last 13 quarters. So, let’s see which hedge funds were among the top holders of the stock and which hedge funds were making big moves. 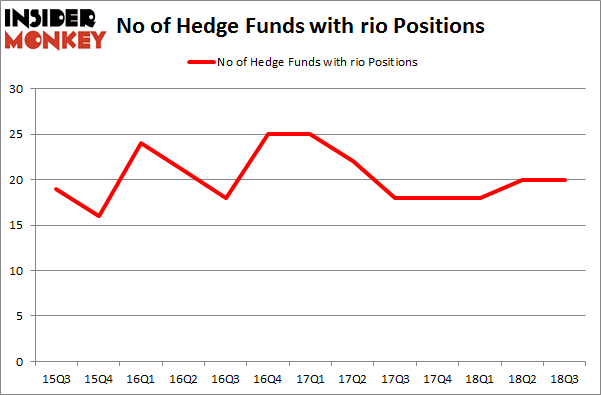 Since Rio Tinto plc (NYSE:RIO) has faced a decline in interest from the entirety of the hedge funds we track, logic holds that there is a sect of fund managers who sold off their positions entirely heading into Q3. At the top of the heap, Ken Heebner’s Capital Growth Management sold off the biggest investment of all the hedgies tracked by Insider Monkey, valued at about $19.4 million in stock. Christopher A. Winham’s fund, Tide Point Capital, also sold off its stock, about $14.9 million worth. These bearish behaviors are interesting, as aggregate hedge fund interest stayed the same (this is a bearish signal in our experience).

As you can see these stocks had an average of 32.5 hedge funds with bullish positions and the average amount invested in these stocks was $3.67 million. That figure was $945 million in RIO’s case. Twenty-First Century Fox Inc (NASDAQ:FOX) is the most popular stock in this table. On the other hand Diageo plc (NYSE:DEO) is the least popular one with only 15 bullish hedge fund positions. Rio Tinto plc (NYSE:RIO) is not the least popular stock in this group but hedge fund interest is still below average. This is a slightly negative signal and we’d rather spend our time researching stocks that hedge funds are piling on. In this regard FOX might be a better candidate to consider a long position.

SPS Commerce, Inc. (SPSC): Are Hedge Funds Right About This Stock?
Monthly Newsletter Strategy
Download a free copy of our newsletter and see the details inside!
Hedge Fund Resource Center
Related News
Is Rio Tinto (RIO) A Hidden Gem or a Chunk of Coal? Billionaire Ken Fisher is Bullish About These Dividend Stocks Five Uranium Stocks to Buy According to Hedge Funds Do Hedge Funds Love Rio Tinto plc (ADR) (RIO)? Why Are These Five Stocks on the Move Today? Netflix, Rio Tinto, and Exxon Mobil Among 5 Stocks Making Waves Today With Brexit Looming, Hedge Funds Weigh In On British Stocks 11 Countries With The Worst Modern Music In The World The Top 5 Robo Advisor Apps of 2018 Five Reasons You Need a Day-Trading Mentor
Billionaire Hedge Funds