Should You Buy PerkinElmer, Inc. (PKI)?

At Q3’s end, a total of 23 of the hedge funds tracked by Insider Monkey held long positions in this stock, a change of 5% from the previous quarter. On the other hand, there were a total of 26 hedge funds with a bullish position in PKI at the beginning of this year. With hedgies’ capital changing hands, there exists an “upper tier” of key hedge fund managers who were adding to their stakes substantially (or already accumulated large positions). 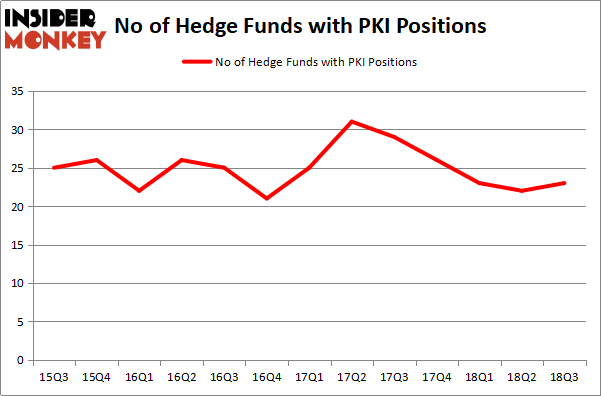 Among these funds, Select Equity Group held the most valuable stake in PerkinElmer, Inc. (NYSE:PKI), which was worth $746.1 million at the end of the third quarter. On the second spot was Impax Asset Management which amassed $82.9 million worth of shares. Moreover, Millennium Management, Partner Fund Management, and Fisher Asset Management were also bullish on PerkinElmer, Inc. (NYSE:PKI), allocating a large percentage of their portfolios to this stock.

As you can see these stocks had an average of 26.5 hedge funds with bullish positions and the average amount invested in these stocks was $688 million. That figure was $1.12 billion in PKI’s case. Sarepta Therapeutics Inc (NASDAQ:SRPT) is the most popular stock in this table. On the other hand Cemex SAB de CV (NYSE:CX) is the least popular one with only 13 bullish hedge fund positions. PerkinElmer, Inc. (NYSE:PKI) is not the least popular stock in this group but hedge fund interest is still below average. This is a slightly negative signal and we’d rather spend our time researching stocks that hedge funds are piling on. In this regard SRPT might be a better candidate to consider a long position.

Hedge Funds Are Betting On ON Semiconductor Corporation (ON)
Monthly Newsletter Strategy
Download a free copy of our newsletter and see the details inside!
Hedge Fund Resource Center
Related News
PerkinElmer, Inc. (PKI): Are Hedge Funds Right About This Stock? Apache Corporation (APA), Johnson Controls, Inc. (JCI) & More: What Edinburgh Partners and Its Peers Think about These Stocks? Amid Portfolio Cuts, Edinburgh Partners Remains Resolute On Favorite Stocks Do Hedge Funds Love PerkinElmer, Inc. (PKI)? Edinburgh Partners Continues To Trim Top Picks Amid 2015 Struggles You Could Double Your Money With This Future Medical Superstar What Hedge Funds Think About Covance Inc. (CVD) Five Reasons You Need a Day-Trading Mentor 15 Most Important Medical Discoveries of 2018 The 10 Best Islands to Visit in 2019
Billionaire Hedge Funds