Should You Buy PepsiCo, Inc. (PEP)?

With the third-quarter round of 13F filings behind us it is time to take a look at the stocks in which some of the best money managers in the world preferred to invest or sell heading into the fourth quarter. One of these stocks was PepsiCo, Inc. (NASDAQ:PEP), one of The 15 Most Popular Snack Brands in the World.

Should you be bubbly about PepsiCo, Inc. (NASDAQ:PEP)’s prospects on the stock market? Hedge funds became more bullish on the company in Q3, though that followed three straight quarters of declining hedge fund ownership. Due to that recent fall from grace, Pepsi has completely fizzed out when it comes to the 30 Most Popular Stocks Among Hedge Funds, ranking a distant 112th. It did however land in 14th place on the list of the 20 Dividend Stocks That Billionaires Are Piling On, with the wealthiest money managers no doubt quite impressed by Pepsi’s 46-year streak of raising its dividend payments each year.

If you’d ask most market participants, hedge funds are seen as unimportant, outdated financial tools of the past. While there are over 8,000 funds trading today, our researchers hone in on the upper echelon of this club, around 700 funds. These investment experts oversee bulk of all hedge funds’ total capital, and by keeping track of their first-class stock picks, Insider Monkey has uncovered a number of investment strategies that have historically outperformed the S&P 500 index. Insider Monkey’s flagship hedge fund strategy beat the S&P 500 index by 6 percentage points per annum since its inception in May 2014 through early November 2018. We were able to generate large returns even by identifying short candidates. Our portfolio of short stocks lost 26.1% since February 2017 even though the market was up nearly 19% during the same period. We just shared a list of 11 short targets in our latest quarterly update.

What have hedge funds been doing with PepsiCo, Inc. (NASDAQ:PEP)? 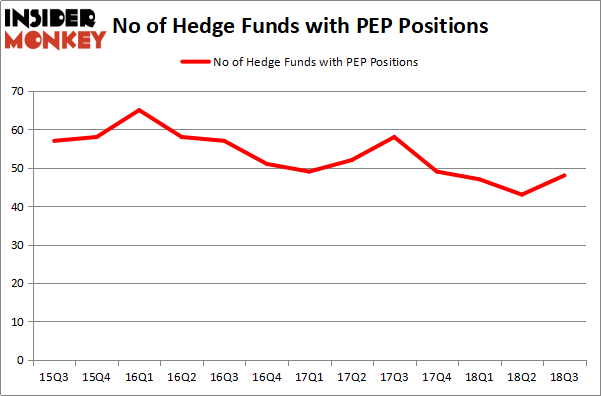 As you can see these stocks had an average of 18 hedge funds with bullish positions and the average amount invested in these stocks was $1.10 billion. That figure was $3.86 billion in PEP’s case. BP plc (NYSE:BP) is the most popular stock in this table. On the other hand SAP SE (NYSE:SAP) is the least popular one with only 12 bullish hedge fund positions. Compared to these stocks PepsiCo, Inc. (NASDAQ:PEP) is more popular among hedge funds. Considering that hedge funds and billionaires are fond of this stock in relation to its market cap peers, it may be a good idea to analyze it in detail and potentially include it in your portfolio.

Here is What Hedge Funds Think About Movado Group, Inc (MOV)
Monthly Newsletter Strategy
Download a free copy of our newsletter and see the details inside!
Hedge Fund Resource Center
Related News
20 Dividend Stocks That Billionaires Are Piling On Billionaire Ken Fisher’s Top Stock Picks Heading Into 2019 Hedge Funds Are Selling PepsiCo, Inc. (PEP). Is it Going to Fizz Out? BlueCrest Capital Management’s Returns, AUM, and Holdings Stocks to Consider for World Cup 2018 Instead of Betting Is PepsiCo, Inc. (PEP) Worthy of Your Portfolio? PepsiCo Inc. (PEP): Continues to Lead The Coca-Cola Co (KO) in Hedge Fund Sentiment The 10 Best Islands to Visit in 2019 5 Most Socially Responsible Companies in America 5 Ways You Can Eliminate Credit Card Debt
Billionaire Hedge Funds