Marten Transport, Ltd (NASDAQ:MRTN) investors should pay attention to an increase in support from the world’s most elite money managers of late. MRTN was in 18 hedge funds’ portfolios at the end of June. There were 17 hedge funds in our database with MRTN positions at the end of the previous quarter. Our calculations also showed that MRTN isn’t among the 30 most popular stocks among hedge funds (see the video below). 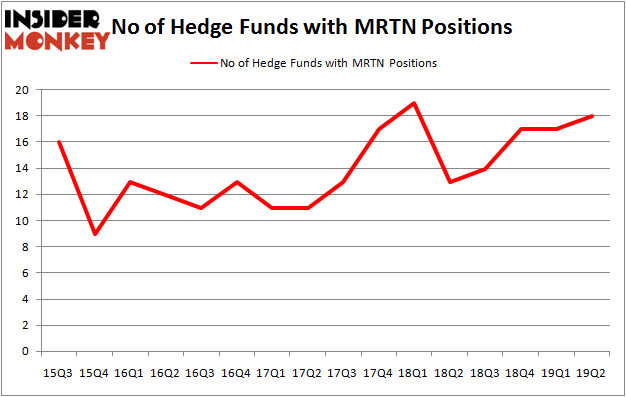 What does smart money think about Marten Transport, Ltd (NASDAQ:MRTN)?

At the end of the second quarter, a total of 18 of the hedge funds tracked by Insider Monkey were bullish on this stock, a change of 6% from one quarter earlier. The graph below displays the number of hedge funds with bullish position in MRTN over the last 16 quarters. With the smart money’s positions undergoing their usual ebb and flow, there exists a few key hedge fund managers who were increasing their holdings substantially (or already accumulated large positions).

According to publicly available hedge fund and institutional investor holdings data compiled by Insider Monkey, MSDC Management, managed by Marc Lisker, Glenn Fuhrman and John Phelan, holds the number one position in Marten Transport, Ltd (NASDAQ:MRTN). MSDC Management has a $9.1 million position in the stock, comprising 1.1% of its 13F portfolio. Coming in second is Israel Englander of Millennium Management, with a $8.3 million position; the fund has less than 0.1%% of its 13F portfolio invested in the stock. Some other peers with similar optimism comprise Michael O’Keefe’s 12th Street Asset Management, Peter Rathjens, Bruce Clarke and John Campbell’s Arrowstreet Capital and John Overdeck and David Siegel’s Two Sigma Advisors.

With a general bullishness amongst the heavyweights, key money managers have jumped into Marten Transport, Ltd (NASDAQ:MRTN) headfirst. Balyasny Asset Management, managed by Dmitry Balyasny, established the most outsized position in Marten Transport, Ltd (NASDAQ:MRTN). Balyasny Asset Management had $0.6 million invested in the company at the end of the quarter. Paul Marshall and Ian Wace’s Marshall Wace LLP also made a $0.3 million investment in the stock during the quarter. The only other fund with a brand new MRTN position is David Harding’s Winton Capital Management.

As you can see these stocks had an average of 11.75 hedge funds with bullish positions and the average amount invested in these stocks was $115 million. That figure was $44 million in MRTN’s case. PJT Partners Inc (NYSE:PJT) is the most popular stock in this table. On the other hand MeiraGTx Holdings plc (NASDAQ:MGTX) is the least popular one with only 9 bullish hedge fund positions. Compared to these stocks Marten Transport, Ltd (NASDAQ:MRTN) is more popular among hedge funds. Our calculations showed that top 20 most popular stocks among hedge funds returned 24.4% in 2019 through September 30th and outperformed the S&P 500 ETF (SPY) by 4 percentage points. Hedge funds were also right about betting on MRTN as the stock returned 18.6% during Q3 and outperformed the market by an even larger margin. Hedge funds were clearly right about piling into this stock relative to other stocks with similar market capitalizations.