Does Marathon Oil Corporation (NYSE:MRO) represent a good buying opportunity at the moment? Let’s briefly check the hedge fund interest towards the company. Hedge fund firms constantly search out bright intellectuals and highly-experienced employees and throw away millions of dollars on research activities, so it is no wonder why they tend to generate millions in profits each year. It is also true that some hedge fund players fail unconceivably on some occasions, but their stock picks have been generating superior risk-adjusted returns on average over the years.

Is Marathon Oil Corporation (NYSE:MRO) undervalued? Money managers are getting more optimistic. The number of long hedge fund positions increased by 1 recently. Our calculations also showed that MRO isn’t among the 30 most popular stocks among hedge funds.

In the financial world there are tons of metrics shareholders use to appraise stocks. A pair of the best metrics are hedge fund and insider trading moves. Our researchers have shown that, historically, those who follow the top picks of the elite investment managers can beat the market by a very impressive amount (see the details here). 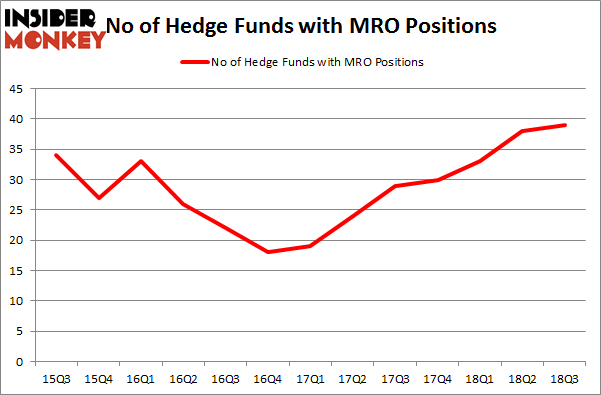 As aggregate interest increased, specific money managers were leading the bulls’ herd. Senator Investment Group, managed by Doug Silverman and Alexander Klabin, initiated the biggest position in Marathon Oil Corporation (NYSE:MRO). Senator Investment Group had $46.6 million invested in the company at the end of the quarter. Clint Carlson’s Carlson Capital also made a $25 million investment in the stock during the quarter. The following funds were also among the new MRO investors: Malcolm Fairbairn’s Ascend Capital, Guy Shahar’s DSAM Partners, and Benjamin A. Smith’s Laurion Capital Management.

As you can see these stocks had an average of 24.25 hedge funds with bullish positions and the average amount invested in these stocks was $812 million. That figure was $1.58 billion in MRO’s case. Regions Financial Corporation (NYSE:RF) is the most popular stock in this table. On the other hand Tenaris S.A. (NYSE:TS) is the least popular one with only 18 bullish hedge fund positions. Compared to these stocks Marathon Oil Corporation (NYSE:MRO) is more popular among hedge funds. Considering that hedge funds are fond of this stock in relation to its market cap peers, it may be a good idea to analyze it in detail and potentially include it in your portfolio.