Although the masses and most of the financial media blame hedge funds for their exorbitant fee structure and disappointing performance, these investors have proved to have great stock picking abilities over the years (that’s why their assets under management continue to swell). We believe hedge fund sentiment should serve as a crucial tool of an individual investor’s stock selection process, as it may offer great insights of how the brightest minds of the finance industry feel about specific stocks. After all, these people have access to smartest analysts and expensive data/information sources that individual investors can’t match. So should one consider investing in Jones Lang LaSalle Inc (NYSE:JLL)? The smart money sentiment can provide an answer to this question.

Is Jones Lang LaSalle Inc (NYSE:JLL) the right investment to pursue these days? Investors who are in the know are in an optimistic mood. The number of bullish hedge fund bets inched up by 3 recently. Our calculations also showed that JLL isn’t among the 30 most popular stocks among hedge funds. JLL was in 21 hedge funds’ portfolios at the end of the third quarter of 2018. There were 18 hedge funds in our database with JLL positions at the end of the previous quarter.

How have hedgies been trading Jones Lang LaSalle Inc (NYSE:JLL)? 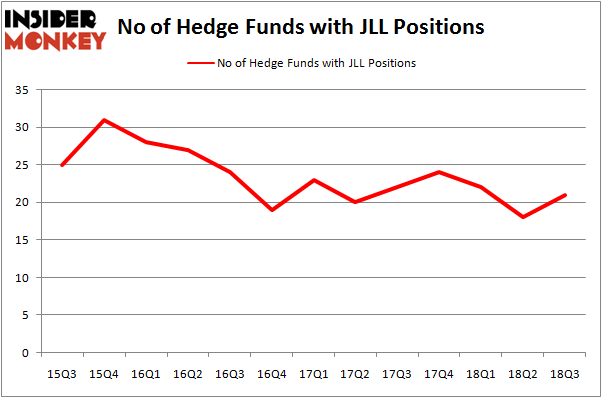 Of the funds tracked by Insider Monkey, Generation Investment Management, managed by David Blood and Al Gore, holds the most valuable position in Jones Lang LaSalle Inc (NYSE:JLL). Generation Investment Management has a $613.5 million position in the stock, comprising 4.9% of its 13F portfolio. Coming in second is Ariel Investments, managed by John W. Rogers, which holds a $103.3 million position; the fund has 1.1% of its 13F portfolio invested in the stock. Other members of the smart money that hold long positions include Ric Dillon’s Diamond Hill Capital, James Parsons’s Junto Capital Management and Chuck Royce’s Royce & Associates.

As you can see these stocks had an average of 12.5 hedge funds with bullish positions and the average amount invested in these stocks was $427 million. That figure was $858 million in JLL’s case. Post Holdings Inc (NYSE:POST) is the most popular stock in this table. On the other hand EnLink Midstream Partners LP (NYSE:ENLK) is the least popular one with only 4 bullish hedge fund positions. Jones Lang LaSalle Inc (NYSE:JLL) is not the most popular stock in this group but hedge fund interest is still above average. This is a slightly positive signal but we’d rather spend our time researching stocks that hedge funds are piling on. In this regard POST might be a better candidate to consider a long position.