We are still in an overall bull market and many stocks that smart money investors were piling into surged through October 17th. Among them, Facebook and Microsoft ranked among the top 3 picks and these stocks gained 45% and 39% respectively. Hedge funds’ top 3 stock picks returned 34.4% this year and beat the S&P 500 ETFs by 13 percentage points. Investing in index funds guarantees you average returns, not superior returns. We are looking to generate superior returns for our readers. That’s why we believe it isn’t a waste of time to check out hedge fund sentiment before you invest in a stock like Independent Bank Corporation (NASDAQ:IBCP).

Hedge fund interest in Independent Bank Corporation (NASDAQ:IBCP) shares was flat at the end of last quarter. This is usually a negative indicator. The level and the change in hedge fund popularity aren’t the only variables you need to analyze to decipher hedge funds’ perspectives. A stock may witness a boost in popularity but it may still be less popular than similarly priced stocks. That’s why at the end of this article we will examine companies such as Changyou.Com Limited (NASDAQ:CYOU), Niu Technologies (NASDAQ:NIU), and American Public Education, Inc. (NASDAQ:APEI) to gather more data points. Our calculations also showed that IBCP isn’t among the 30 most popular stocks among hedge funds (see the video below).

At the end of the second quarter, a total of 11 of the hedge funds tracked by Insider Monkey held long positions in this stock, a change of 0% from the first quarter of 2019. The graph below displays the number of hedge funds with bullish position in IBCP over the last 16 quarters. So, let’s review which hedge funds were among the top holders of the stock and which hedge funds were making big moves. 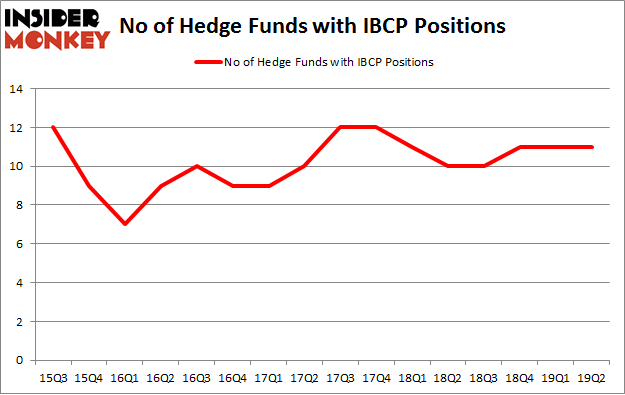 According to publicly available hedge fund and institutional investor holdings data compiled by Insider Monkey, Renaissance Technologies holds the number one position in Independent Bank Corporation (NASDAQ:IBCP). Renaissance Technologies has a $23.1 million position in the stock, comprising less than 0.1%% of its 13F portfolio. Sitting at the No. 2 spot is Millennium Management, led by Israel Englander, holding a $7.8 million position; the fund has less than 0.1%% of its 13F portfolio invested in the stock. Remaining members of the smart money that hold long positions include Cliff Asness’s AQR Capital Management, D. E. Shaw’s D E Shaw and John Overdeck and David Siegel’s Two Sigma Advisors.

We view hedge fund activity in the stock unfavorable, but in this case there was only a single hedge fund selling its entire position: Marshall Wace LLP. One hedge fund selling its entire position doesn’t always imply a bearish intent. Theoretically a hedge fund may decide to sell a promising position in order to invest the proceeds in a more promising idea. However, we don’t think this is the case in this case because only one of the 800+ hedge funds tracked by Insider Monkey identified as a viable investment and initiated a position in the stock (that fund was Algert Coldiron Investors).

As you can see these stocks had an average of 7.75 hedge funds with bullish positions and the average amount invested in these stocks was $36 million. That figure was $47 million in IBCP’s case. American Public Education, Inc. (NASDAQ:APEI) is the most popular stock in this table. On the other hand Arrow Financial Corporation (NASDAQ:AROW) is the least popular one with only 3 bullish hedge fund positions. Independent Bank Corporation (NASDAQ:IBCP) is not the most popular stock in this group but hedge fund interest is still above average. This is a slightly positive signal but we’d rather spend our time researching stocks that hedge funds are piling on. Our calculations showed that top 20 most popular stocks among hedge funds returned 24.4% in 2019 through September 30th and outperformed the S&P 500 ETF (SPY) by 4 percentage points. Unfortunately IBCP wasn’t nearly as popular as these 20 stocks and hedge funds that were betting on IBCP were disappointed as the stock returned -1.3% during the third quarter and underperformed the market. If you are interested in investing in large cap stocks with huge upside potential, you should check out the top 20 most popular stocks among hedge funds as many of these stocks already outperformed the market so far this year.