Should You Buy Grifols SA (GRFS)?

Grifols SA (NASDAQ:GRFS) was in 14 hedge funds’ portfolios at the end of December. GRFS has experienced an increase in hedge fund interest recently. There were 12 hedge funds in our database with GRFS positions at the end of the previous quarter. Our calculations also showed that GRFS isn’t among the 30 most popular stocks among hedge funds. 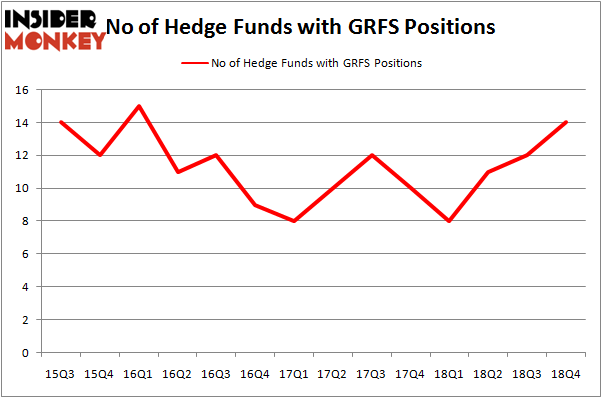 More specifically, Arrowstreet Capital was the largest shareholder of Grifols SA (NASDAQ:GRFS), with a stake worth $53.9 million reported as of the end of September. Trailing Arrowstreet Capital was Farallon Capital, which amassed a stake valued at $43.7 million. Millennium Management, GLG Partners, and Polar Capital were also very fond of the stock, giving the stock large weights in their portfolios.

As industrywide interest jumped, key hedge funds were breaking ground themselves. Citadel Investment Group, managed by Ken Griffin, established the most valuable position in Grifols SA (NASDAQ:GRFS). Citadel Investment Group had $2.5 million invested in the company at the end of the quarter. Matthew Tewksbury’s Stevens Capital Management also initiated a $0.3 million position during the quarter.

As you can see these stocks had an average of 32.75 hedge funds with bullish positions and the average amount invested in these stocks was $1049 million. That figure was $186 million in GRFS’s case. Lululemon Athletica inc. (NASDAQ:LULU) is the most popular stock in this table. On the other hand The Hartford Financial Services Group Inc (NYSE:HIG) is the least popular one with only 30 bullish hedge fund positions. Compared to these stocks Grifols SA (NASDAQ:GRFS) is even less popular than HIG. Our calculations showed that top 15 most popular stocks among hedge funds returned 19.7% through March 15th and outperformed the S&P 500 ETF (SPY) by 6.6 percentage points. Unfortunately GRFS wasn’t in this group. Hedge funds that bet on GRFS were disappointed as the stock returned 10.9% and underperformed the market. If you are interested in investing in large cap stocks, you should check out the top 15 hedge fund stocks as 13 of these outperformed the market.