Hedge funds are not perfect. They have their bad picks just like everyone else. Facebook, a stock hedge funds have loved, lost a third of its value since the end of July. Although hedge funds are not perfect, their consensus picks do deliver solid returns, however. Our data show the top 30 S&P 500 stocks among hedge funds at the end of September 2018 yielded an average return of 6.7% year-to-date, vs. a gain of 2.6% for the S&P 500 Index. Because hedge funds have a lot of resources and their consensus picks do well, we pay attention to what they think. In this article, we analyze what the elite funds think of First Hawaiian, Inc. (NASDAQ:FHB).

First Hawaiian, Inc. (NASDAQ:FHB) was in 28 hedge funds’ portfolios at the end of September. FHB shareholders have witnessed an increase in enthusiasm from smart money of late. There were 20 hedge funds in our database with FHB positions at the end of the previous quarter. Our calculations also showed that FHB isn’t among the 30 most popular stocks among hedge funds.

Heading into the fourth quarter of 2018, a total of 28 of the hedge funds tracked by Insider Monkey held long positions in this stock, a change of 40% from the previous quarter. Below, you can check out the change in hedge fund sentiment towards FHB over the last 13 quarters. With hedge funds’ positions undergoing their usual ebb and flow, there exists an “upper tier” of noteworthy hedge fund managers who were boosting their stakes considerably (or already accumulated large positions). 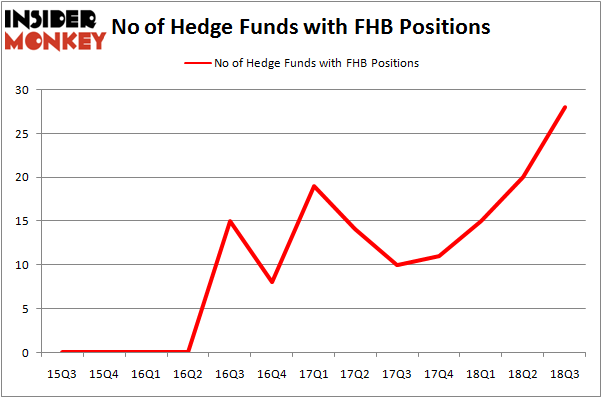 According to publicly available hedge fund and institutional investor holdings data compiled by Insider Monkey, Ken Griffin’s Citadel Investment Group has the largest position in First Hawaiian, Inc. (NASDAQ:FHB), worth close to $84.7 million, accounting for less than 0.1% of its total 13F portfolio. Coming in second is Element Capital Management, led by Jeffrey Talpins, holding a $74.9 million position; the fund has 1.5% of its 13F portfolio invested in the stock. Some other hedge funds and institutional investors that hold long positions include Israel Englander’s Millennium Management, John Overdeck and David Siegel’s Two Sigma Advisors and Scott Bessent’s Key Square Capital Management.

As aggregate interest increased, some big names have been driving this bullishness. Element Capital Management, managed by Jeffrey Talpins, initiated the most valuable position in First Hawaiian, Inc. (NASDAQ:FHB). Element Capital Management had $74.9 million invested in the company at the end of the quarter. Scott Bessent’s Key Square Capital Management also made a $40.7 million investment in the stock during the quarter. The following funds were also among the new FHB investors: Clint Carlson’s Carlson Capital, Paul Marshall and Ian Wace’s Marshall Wace LLP, and Emanuel J. Friedman’s EJF Capital.

As you can see these stocks had an average of 17.75 hedge funds with bullish positions and the average amount invested in these stocks was $348 million. That figure was $477 million in FHB’s case. Investors Bancorp, Inc. (NASDAQ:ISBC) is the most popular stock in this table. On the other hand Healthcare Realty Trust Inc (NYSE:HR) is the least popular one with only 4 bullish hedge fund positions. First Hawaiian, Inc. (NASDAQ:FHB) is not the most popular stock in this group but hedge fund interest is still above average. This is a slightly positive signal but we’d rather spend our time researching stocks that hedge funds are piling on. In this regard ISBC might be a better candidate to consider a long position.

Is The PNC Financial Services Group, Inc. (PNC) A Good Stock To Buy?
Monthly Newsletter Strategy
Download a free copy of our newsletter and see the details inside!
Hedge Fund Resource Center
Related News
Is First Hawaiian Inc (FHB) Worthy of Your Portfolio? The 10 Best Islands to Visit in 2019 5 Most Socially Responsible Companies in America 5 Ways You Can Eliminate Credit Card Debt
Billionaire Hedge Funds