The first quarter was a breeze as Powell pivoted, and China seemed eager to reach a deal with Trump. Both the S&P 500 and Russell 2000 delivered very strong gains as a result, with the Russell 2000, which is composed of smaller companies, outperforming the large-cap stocks slightly during the first quarter. Unfortunately sentiment shifted in May and August as this time China pivoted and Trump put more pressure on China by increasing tariffs. Fourth quarter brought optimism to the markets and hedge funds’ top 20 stock picks performed spectacularly in this volatile environment. These stocks delivered a total gain of 37.4% through the end of November, vs. a gain of 27.5% for the S&P 500 ETF. In this article we will look at how this market volatility affected the sentiment of hedge funds towards Fiesta Restaurant Group Inc (NASDAQ:FRGI), and what that likely means for the prospects of the company and its stock.

Fiesta Restaurant Group Inc (NASDAQ:FRGI) shares haven’t seen a lot of action during the third quarter. Overall, hedge fund sentiment was unchanged. The stock was in 14 hedge funds’ portfolios at the end of September. The level and the change in hedge fund popularity aren’t the only variables you need to analyze to decipher hedge funds’ perspectives. A stock may witness a boost in popularity but it may still be less popular than similarly priced stocks. That’s why at the end of this article we will examine companies such as ViewRay, Inc. (NASDAQ:VRAY), Solar Senior Capital Ltd (NASDAQ:SUNS), and Parker Drilling Company (NYSE:PKD) to gather more data points. Our calculations also showed that FRGI isn’t among the 30 most popular stocks among hedge funds (click for Q3 rankings and see the video below for Q2 rankings).

We leave no stone unturned when looking for the next great investment idea. For example Europe is set to become the world’s largest cannabis market, so we check out this European marijuana stock pitch. One of the most bullish analysts in America just put his money where his mouth is. He says, “I’m investing more today than I did back in early 2009.” So we check out his pitch. We read hedge fund investor letters and listen to stock pitches at hedge fund conferences. We also rely on the best performing hedge funds‘ buy/sell signals. We’re going to go over the key hedge fund action regarding Fiesta Restaurant Group Inc (NASDAQ:FRGI).

Heading into the fourth quarter of 2019, a total of 14 of the hedge funds tracked by Insider Monkey were long this stock, a change of 0% from the previous quarter. Below, you can check out the change in hedge fund sentiment towards FRGI over the last 17 quarters. With hedgies’ sentiment swirling, there exists an “upper tier” of key hedge fund managers who were upping their holdings significantly (or already accumulated large positions). 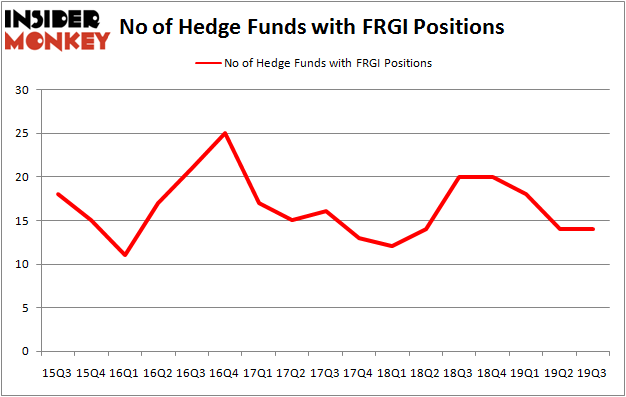 More specifically, Leucadia National was the largest shareholder of Fiesta Restaurant Group Inc (NASDAQ:FRGI), with a stake worth $54.8 million reported as of the end of September. Trailing Leucadia National was Private Capital Management, which amassed a stake valued at $21 million. D E Shaw, Bandera Partners, and Birch Run Capital were also very fond of the stock, becoming one of the largest hedge fund holders of the company. In terms of the portfolio weights assigned to each position Leucadia National allocated the biggest weight to Fiesta Restaurant Group Inc (NASDAQ:FRGI), around 9.86% of its 13F portfolio. Bandera Partners is also relatively very bullish on the stock, designating 4.21 percent of its 13F equity portfolio to FRGI.

Because Fiesta Restaurant Group Inc (NASDAQ:FRGI) has faced declining sentiment from the entirety of the hedge funds we track, logic holds that there is a sect of money managers who were dropping their full holdings last quarter. At the top of the heap, John Overdeck and David Siegel’s Two Sigma Advisors cut the biggest stake of the 750 funds followed by Insider Monkey, totaling about $1.3 million in stock, and Philippe Laffont’s Coatue Management was right behind this move, as the fund said goodbye to about $1 million worth. These bearish behaviors are important to note, as total hedge fund interest stayed the same (this is a bearish signal in our experience).

As you can see these stocks had an average of 7.25 hedge funds with bullish positions and the average amount invested in these stocks was $49 million. That figure was $103 million in FRGI’s case. ViewRay, Inc. (NASDAQ:VRAY) is the most popular stock in this table. On the other hand 22nd Century Group, Inc (NYSE:XXII) is the least popular one with only 2 bullish hedge fund positions. Fiesta Restaurant Group Inc (NASDAQ:FRGI) is not the most popular stock in this group but hedge fund interest is still above average. This is a slightly positive signal but we’d rather spend our time researching stocks that hedge funds are piling on. Our calculations showed that top 20 most popular stocks among hedge funds returned 37.4% in 2019 through the end of November and outperformed the S&P 500 ETF (SPY) by 9.9 percentage points. Unfortunately FRGI wasn’t nearly as popular as these 20 stocks and hedge funds that were betting on FRGI were disappointed as the stock returned -5% during the fourth quarter (through the end of November) and underperformed the market. If you are interested in investing in large cap stocks with huge upside potential, you should check out the top 20 most popular stocks among hedge funds as many of these stocks already outperformed the market so far this year.