The latest 13F reporting period has come and gone, and Insider Monkey is again at the forefront when it comes to making use of this gold mine of data. We at Insider Monkey have plowed through 752 13F filings that hedge funds and well-known value investors are required to file by the SEC. The 13F filings show the funds’ and investors’ portfolio positions as of September 30th. In this article we look at what those investors think of Cresud S.A.C.I.F. y A. (NASDAQ:CRESY).

Hedge fund interest in Cresud S.A.C.I.F. y A. (NASDAQ:CRESY) shares was flat at the end of last quarter. This is usually a negative indicator. At the end of this article we will also compare CRESY to other stocks including Ardelyx Inc (NASDAQ:ARDX), Pacific Drilling SA (NYSE:PACD), and Grupo Supervielle S.A. (NYSE:SUPV) to get a better sense of its popularity.

To most traders, hedge funds are seen as worthless, old financial vehicles of years past. While there are over 8000 funds in operation at the moment, Our researchers hone in on the leaders of this group, about 750 funds. Most estimates calculate that this group of people have their hands on bulk of the hedge fund industry’s total asset base, and by watching their finest picks, Insider Monkey has unearthed various investment strategies that have historically outstripped the market. Insider Monkey’s flagship short hedge fund strategy beat the S&P 500 short ETFs by around 20 percentage points a year since its inception in May 2014. Our portfolio of short stocks lost 27.8% since February 2017 (through November 21st) even though the market was up more than 39% during the same period. We just shared a list of 7 short targets in our latest quarterly update .

We leave no stone unturned when looking for the next great investment idea. For example Europe is set to become the world’s largest cannabis market, so we check out this European marijuana stock pitch. One of the most bullish analysts in America just put his money where his mouth is. He says, “I’m investing more today than I did back in early 2009.” So we check out his pitch. We read hedge fund investor letters and listen to stock pitches at hedge fund conferences. We also rely on the best performing hedge funds‘ buy/sell signals. We’re going to check out the key hedge fund action surrounding Cresud S.A.C.I.F. y A. (NASDAQ:CRESY).

How are hedge funds trading Cresud S.A.C.I.F. y A. (NASDAQ:CRESY)?

Heading into the fourth quarter of 2019, a total of 7 of the hedge funds tracked by Insider Monkey were bullish on this stock, a change of 0% from the second quarter of 2019. By comparison, 5 hedge funds held shares or bullish call options in CRESY a year ago. With the smart money’s capital changing hands, there exists an “upper tier” of noteworthy hedge fund managers who were upping their holdings substantially (or already accumulated large positions). 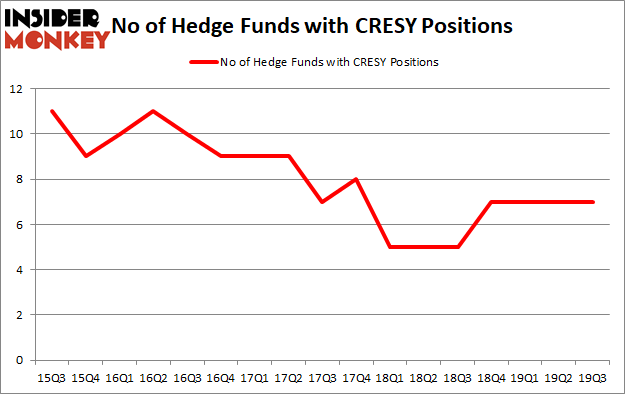 More specifically, 683 Capital Partners was the largest shareholder of Cresud S.A.C.I.F. y A. (NASDAQ:CRESY), with a stake worth $5.5 million reported as of the end of September. Trailing 683 Capital Partners was General Equity Partners, which amassed a stake valued at $4.7 million. Highland Capital Management, Renaissance Technologies, and Ionic Capital Management were also very fond of the stock, becoming one of the largest hedge fund holders of the company. In terms of the portfolio weights assigned to each position General Equity Partners allocated the biggest weight to Cresud S.A.C.I.F. y A. (NASDAQ:CRESY), around 3.77% of its 13F portfolio. 683 Capital Partners is also relatively very bullish on the stock, dishing out 0.62 percent of its 13F equity portfolio to CRESY.

Judging by the fact that Cresud S.A.C.I.F. y A. (NASDAQ:CRESY) has witnessed a decline in interest from the smart money, we can see that there was a specific group of hedgies that slashed their positions entirely heading into Q4. At the top of the heap, Jody LaNasa’s Serengeti Asset Management sold off the biggest investment of all the hedgies watched by Insider Monkey, valued at close to $3.7 million in stock. Gavin Saitowitz and Cisco J. del Valle’s fund, Springbok Capital, also dropped its stock, about $0 million worth. These transactions are intriguing to say the least, as aggregate hedge fund interest stayed the same (this is a bearish signal in our experience).

Let’s now take a look at hedge fund activity in other stocks – not necessarily in the same industry as Cresud S.A.C.I.F. y A. (NASDAQ:CRESY) but similarly valued. We will take a look at Ardelyx Inc (NASDAQ:ARDX), Pacific Drilling SA (NYSE:PACD), Grupo Supervielle S.A. (NYSE:SUPV), and South Plains Financial, Inc. (NASDAQ:SPFI). This group of stocks’ market valuations are similar to CRESY’s market valuation.

As you can see these stocks had an average of 8.75 hedge funds with bullish positions and the average amount invested in these stocks was $79 million. That figure was $13 million in CRESY’s case. Ardelyx Inc (NASDAQ:ARDX) is the most popular stock in this table. On the other hand Grupo Supervielle S.A. (NYSE:SUPV) is the least popular one with only 5 bullish hedge fund positions. Cresud S.A.C.I.F. y A. (NASDAQ:CRESY) is not the least popular stock in this group but hedge fund interest is still below average. This is a slightly negative signal and we’d rather spend our time researching stocks that hedge funds are piling on. Our calculations showed that top 20 most popular stocks among hedge funds returned 37.4% in 2019 through the end of November and outperformed the S&P 500 ETF (SPY) by 9.9 percentage points. Unfortunately CRESY wasn’t nearly as popular as these 20 stocks (hedge fund sentiment was quite bearish); CRESY investors were disappointed as the stock returned -2.7% during the first two months of the fourth quarter and underperformed the market. If you are interested in investing in large cap stocks with huge upside potential, you should check out the top 20 most popular stocks among hedge funds as 70 percent of these stocks already outperformed the market in Q4.