The Insider Monkey team has completed processing the quarterly 13F filings for the December quarter submitted by the hedge funds and other money managers included in our extensive database. Most hedge fund investors endured a torrid quarter, which certainly propelled them to adjust their equity holdings so as to maintain the desired risk profile. As a result, the relevancy of these public filings and their content is indisputable, as they may reveal numerous high-potential stocks. The following article will discuss the smart money sentiment towards Citizens Financial Group Inc (NYSE:CFG).

Citizens Financial Group Inc (NYSE:CFG) investors should pay attention to an increase in enthusiasm from smart money lately. CFG was in 43 hedge funds’ portfolios at the end of December. There were 42 hedge funds in our database with CFG positions at the end of the previous quarter. Our calculations also showed that CFG isn’t among the 30 most popular stocks among hedge funds.

At Q4’s end, a total of 43 of the hedge funds tracked by Insider Monkey were long this stock, a change of 2% from one quarter earlier. By comparison, 45 hedge funds held shares or bullish call options in CFG a year ago. With hedge funds’ sentiment swirling, there exists a select group of noteworthy hedge fund managers who were adding to their stakes considerably (or already accumulated large positions). 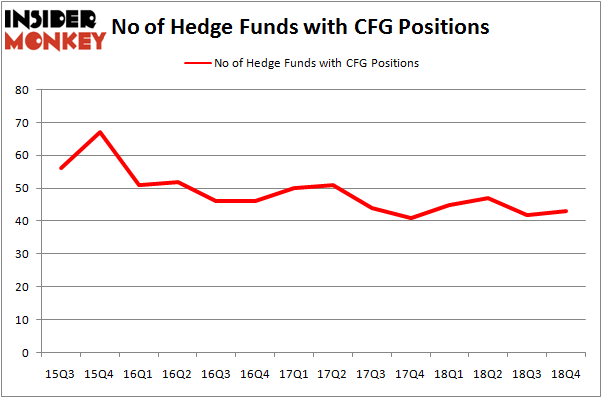 When looking at the institutional investors followed by Insider Monkey, Citadel Investment Group, managed by Ken Griffin, holds the largest position in Citizens Financial Group Inc (NYSE:CFG). Citadel Investment Group has a $369.6 million position in the stock, comprising 0.2% of its 13F portfolio. The second largest stake is held by Arrowstreet Capital, led by Peter Rathjens, Bruce Clarke and John Campbell, holding a $139.8 million position; the fund has 0.4% of its 13F portfolio invested in the stock. Other peers with similar optimism consist of Israel Englander’s Millennium Management, John Overdeck and David Siegel’s Two Sigma Advisors and Clint Carlson’s Carlson Capital.

Now, key money managers were breaking ground themselves. Renaissance Technologies, managed by Jim Simons, assembled the biggest position in Citizens Financial Group Inc (NYSE:CFG). Renaissance Technologies had $42.6 million invested in the company at the end of the quarter. Matthew Tewksbury’s Stevens Capital Management also made a $10.2 million investment in the stock during the quarter. The other funds with new positions in the stock are Dmitry Balyasny’s Balyasny Asset Management, Gregg Moskowitz’s Interval Partners, and Matthew Hulsizer’s PEAK6 Capital Management.

As you can see these stocks had an average of 24.5 hedge funds with bullish positions and the average amount invested in these stocks was $752 million. That figure was $1364 million in CFG’s case. Regions Financial Corporation (NYSE:RF) is the most popular stock in this table. On the other hand Ryanair Holdings plc (NASDAQ:RYAAY) is the least popular one with only 9 bullish hedge fund positions. Compared to these stocks Citizens Financial Group Inc (NYSE:CFG) is more popular among hedge funds. Considering that hedge funds are fond of this stock in relation to its market cap peers, it may be a good idea to analyze it in detail and potentially include it in your portfolio. Our calculations showed that top 15 most popular stocks among hedge funds returned 19.7% through March 15th and outperformed the S&P 500 ETF (SPY) by 6.6 percentage points. Hedge funds were also right about betting on CFG as the stock returned 21.8% and outperformed the market as well.