Should You Buy Broadcom Inc (AVGO)?

The 700+ hedge funds and famous money managers tracked by Insider Monkey have already compiled and submitted their 13F filings for the second quarter, which unveil their equity positions as of June 28. We went through these filings, fixed typos and other more significant errors and identified the changes in hedge fund portfolios. Our extensive review of these public filings is finally over, so this article is set to reveal the smart money sentiment towards Broadcom Inc (NASDAQ:AVGO).

Hedge fund interest in Broadcom Inc (NASDAQ:AVGO) shares was flat at the end of last quarter. This is usually a negative indicator. The level and the change in hedge fund popularity aren’t the only variables you need to analyze to decipher hedge funds’ perspectives. A stock may witness a boost in popularity but it may still be less popular than similarly priced stocks. That’s why at the end of this article we will examine companies such as Costco Wholesale Corporation (NASDAQ:COST), Royal Bank of Canada (NYSE:RY), and United Technologies Corporation (NYSE:UTX) to gather more data points.

Unlike some fund managers who are betting on Dow reaching 40000 in a year, our long-short investment strategy doesn’t rely on bull markets to deliver double digit returns. We only rely on hedge fund buy/sell signals. We’re going to go over the key hedge fund action surrounding Broadcom Inc (NASDAQ:AVGO).

At the end of the second quarter, a total of 53 of the hedge funds tracked by Insider Monkey were bullish on this stock, a change of 0% from the previous quarter. Below, you can check out the change in hedge fund sentiment towards AVGO over the last 16 quarters. So, let’s see which hedge funds were among the top holders of the stock and which hedge funds were making big moves. 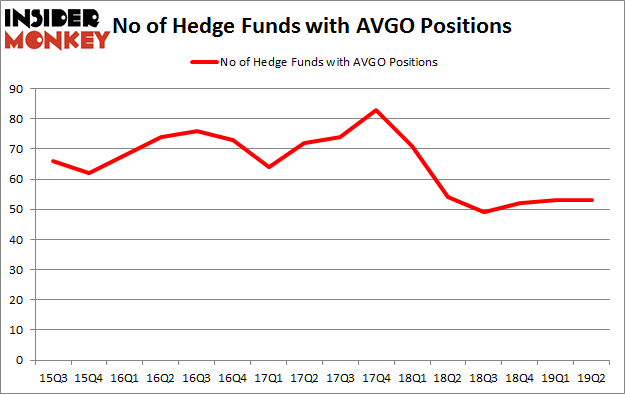 According to publicly available hedge fund and institutional investor holdings data compiled by Insider Monkey, Robert Rodriguez and Steven Romick’s First Pacific Advisors LLC has the biggest position in Broadcom Inc (NASDAQ:AVGO), worth close to $503.6 million, accounting for 4.4% of its total 13F portfolio. Sitting at the No. 2 spot is Citadel Investment Group, led by Ken Griffin, holding a $492.2 million position; 0.2% of its 13F portfolio is allocated to the stock. Other members of the smart money that are bullish consist of William von Mueffling’s Cantillon Capital Management, Karthik Sarma’s SRS Investment Management and Ken Griffin’s Citadel Investment Group.

Since Broadcom Inc (NASDAQ:AVGO) has experienced declining sentiment from hedge fund managers, logic holds that there lies a certain “tier” of money managers that slashed their entire stakes last quarter. Intriguingly, Peter Rathjens, Bruce Clarke and John Campbell’s Arrowstreet Capital said goodbye to the largest stake of all the hedgies watched by Insider Monkey, valued at an estimated $103.1 million in stock. Jim Simons’s fund, Renaissance Technologies, also sold off its stock, about $63.1 million worth. These transactions are important to note, as total hedge fund interest stayed the same (this is a bearish signal in our experience).

As you can see these stocks had an average of 40.5 hedge funds with bullish positions and the average amount invested in these stocks was $3202 million. That figure was $3269 million in AVGO’s case. United Technologies Corporation (NYSE:UTX) is the most popular stock in this table. On the other hand Royal Bank of Canada (NYSE:RY) is the least popular one with only 15 bullish hedge fund positions. Broadcom Inc (NASDAQ:AVGO) is not the most popular stock in this group but hedge fund interest is still above average. This is a slightly positive signal but we’d rather spend our time researching stocks that hedge funds are piling on. Our calculations showed that top 20 most popular stocks among hedge funds returned 24.4% in 2019 through September 30th and outperformed the S&P 500 ETF (SPY) by 4 percentage points. Unfortunately AVGO wasn’t nearly as popular as these 20 stocks and hedge funds that were betting on AVGO were disappointed as the stock returned -3.2% during the third quarter and underperformed the market. If you are interested in investing in large cap stocks with huge upside potential, you should check out the top 20 most popular stocks (watch the video below) among hedge funds as many of these stocks already outperformed the market so far this year.