There are several ways to beat the market, and investing in small cap stocks has historically been one of them. We like to improve the odds of beating the market further by examining what famous hedge fund operators such as Carl Icahn and George Soros think. Those hedge fund operators make billions of dollars each year by hiring the best and the brightest to do research on stocks, including small cap stocks that big brokerage houses simply don’t cover. Because of Carl Icahn and other elite funds’ exemplary historical records, we pay attention to their small cap picks. In this article, we use hedge fund filing data to analyze Ascendis Pharma A/S (NASDAQ:ASND).

Is Ascendis Pharma A/S (NASDAQ:ASND) ready to rally soon? Money managers are buying. The number of long hedge fund bets improved by 1 in recent months. Our calculations also showed that asnd isn’t among the 30 most popular stocks among hedge funds. ASND was in 27 hedge funds’ portfolios at the end of September. There were 26 hedge funds in our database with ASND holdings at the end of the previous quarter.

To the average investor there are plenty of metrics stock market investors put to use to size up publicly traded companies. Some of the most underrated metrics are hedge fund and insider trading moves. Our experts have shown that, historically, those who follow the top picks of the best fund managers can trounce the broader indices by a healthy amount (see the details here). 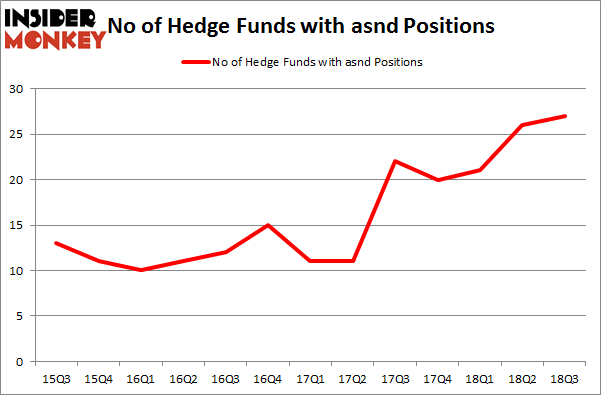 Of the funds tracked by Insider Monkey, Peter Kolchinsky’s RA Capital Management has the number one position in Ascendis Pharma A/S (NASDAQ:ASND), worth close to $300.5 million, corresponding to 16.1% of its total 13F portfolio. Coming in second is OrbiMed Advisors, led by Samuel Isaly, holding a $294.5 million position; the fund has 3.5% of its 13F portfolio invested in the stock. Some other peers that hold long positions comprise Julian Baker and Felix Baker’s Baker Bros. Advisors, Behzad Aghazadeh’s venBio Select Advisor and Thomas Steyer’s Farallon Capital.

Consequently, specific money managers have been driving this bullishness. EcoR1 Capital, managed by Oleg Nodelman, assembled the most outsized call position in Ascendis Pharma A/S (NASDAQ:ASND). EcoR1 Capital had $18.2 million invested in the company at the end of the quarter. David Costen Haley’s HBK Investments also made a $0.5 million investment in the stock during the quarter.

As you can see these stocks had an average of 12 hedge funds with bullish positions and the average amount invested in these stocks was $134 million. That figure was $1.40 billion in ASND’s case. SailPoint Technologies Holdings, Inc. (NYSE:SAIL) is the most popular stock in this table. On the other hand NuStar Energy L.P. (NYSE:NS) is the least popular one with only 2 bullish hedge fund positions. Compared to these stocks Ascendis Pharma A/S (NASDAQ:ASND) is more popular among hedge funds. Considering that hedge funds are fond of this stock in relation to its market cap peers, it may be a good idea to analyze it in detail and potentially include it in your portfolio.