Should You Avoid The Bank of Princeton (BPRN)?

Out of thousands of stocks that are currently traded on the market, it is difficult to identify those that will really generate strong returns. Hedge funds and institutional investors spend millions of dollars on analysts with MBAs and PhDs, who are industry experts and well connected to other industry and media insiders on top of that. Individual investors can piggyback the hedge funds employing these talents and can benefit from their vast resources and knowledge in that way. We analyze quarterly 13F filings of nearly 750 hedge funds and, by looking at the smart money sentiment that surrounds a stock, we can determine whether it has the potential to beat the market over the long-term. Therefore, let’s take a closer look at what smart money thinks about The Bank of Princeton (NASDAQ:BPRN).

Is The Bank of Princeton (NASDAQ:BPRN) worth your attention right now? Prominent investors are taking a bearish view. The number of bullish hedge fund bets went down by 1 lately. Our calculations also showed that BPRN isn’t among the 30 most popular stocks among hedge funds (see the video below).

Let’s take a glance at the key hedge fund action surrounding The Bank of Princeton (NASDAQ:BPRN).

What have hedge funds been doing with The Bank of Princeton (NASDAQ:BPRN)? 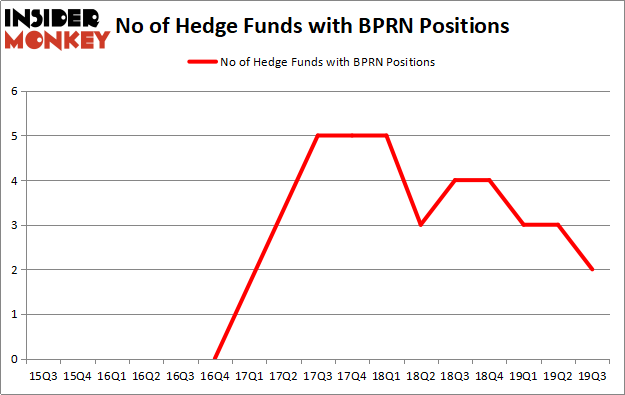 Of the funds tracked by Insider Monkey, Emanuel J. Friedman’s EJF Capital has the biggest position in The Bank of Princeton (NASDAQ:BPRN), worth close to $13.1 million, amounting to 1.8% of its total 13F portfolio. The second largest stake is held by Renaissance Technologies which holds a $1.4 million position; less than 0.1%% of its 13F portfolio is allocated to the stock. In terms of the portfolio weights assigned to each position EJF Capital allocated the biggest weight to The Bank of Princeton (NASDAQ:BPRN), around 1.79% of its portfolio. Renaissance Technologies is also relatively very bullish on the stock, setting aside 0.0012 percent of its 13F equity portfolio to BPRN.

We view hedge fund activity in the stock unfavorable, but in this case there was only a single hedge fund selling its entire position: Millennium Management. One hedge fund selling its entire position doesn’t always imply a bearish intent. Theoretically a hedge fund may decide to sell a promising position in order to invest the proceeds in a more promising idea. However, we don’t think this is the case in this case because none of the 750+ hedge funds tracked by Insider Monkey identified BPRN as a viable investment and initiated a position in the stock.

As you can see these stocks had an average of 7.75 hedge funds with bullish positions and the average amount invested in these stocks was $11 million. That figure was $15 million in BPRN’s case. DASAN Zhone Solutions, Inc. (NASDAQ:DZSI) is the most popular stock in this table. On the other hand Evelo Biosciences, Inc. (NASDAQ:EVLO) is the least popular one with only 5 bullish hedge fund positions. Compared to these stocks The Bank of Princeton (NASDAQ:BPRN) is even less popular than EVLO. Hedge funds dodged a bullet by taking a bearish stance towards BPRN. Our calculations showed that the top 20 most popular hedge fund stocks returned 34.7% in 2019 through November 22nd and outperformed the S&P 500 ETF (SPY) by 8.5 percentage points. Unfortunately BPRN wasn’t nearly as popular as these 20 stocks (hedge fund sentiment was very bearish); BPRN investors were disappointed as the stock returned 1.5% during the fourth quarter (through 11/22) and underperformed the market. If you are interested in investing in large cap stocks with huge upside potential, you should check out the top 20 most popular stocks among hedge funds as 70 percent of these stocks already outperformed the market so far in Q4.

Should You Buy Wheeler Real Estate Investment Trust, Inc. (WHLRP)?
Monthly Newsletter Strategy
Download a free copy of our newsletter and see the details inside!
Hedge Fund Resource Center
Related News
10 Human Trafficking Stories in America 10 Easiest Instruments For Adults To Learn On Their Own 10 Most Profitable Franchises In The World
Billionaire Hedge Funds