Should You Avoid Rapid7 Inc (RPD)?

It was a rough fourth quarter for many hedge funds, which were naturally unable to overcome the big dip in the broad market, as the S&P 500 fell by about 4.8% during 2018 and average hedge fund losing about 1%. The Russell 2000, composed of smaller companies, performed even worse, trailing the S&P by more than 6 percentage points, as investors fled less-known quantities for safe havens. Luckily hedge funds were shifting their holdings into large-cap stocks. The 20 most popular hedge fund stocks actually generated an average return of 24.4% during the first 9 months of 2019 and outperformed the S&P 500 ETF by 4 percentage points. We are done processing the latest 13f filings and in this article we will study how hedge fund sentiment towards Rapid7 Inc (NASDAQ:RPD) changed during the first quarter.

Rapid7 Inc (NASDAQ:RPD) investors should pay attention to a decrease in hedge fund sentiment in recent months. RPD was in 25 hedge funds’ portfolios at the end of the second quarter of 2019. There were 27 hedge funds in our database with RPD holdings at the end of the previous quarter. Our calculations also showed that RPD isn’t among the 30 most popular stocks among hedge funds (see the video below).

What does smart money think about Rapid7 Inc (NASDAQ:RPD)? 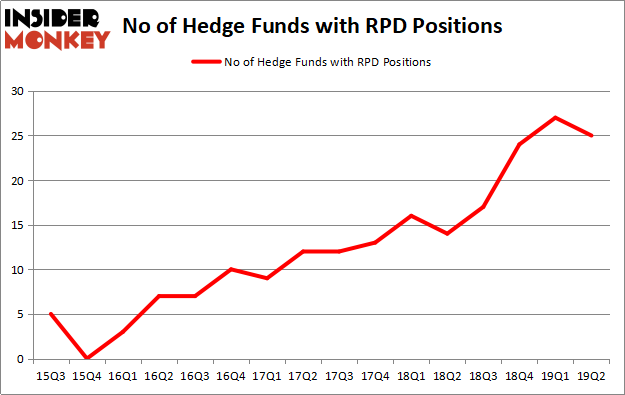 Among these funds, SQN Investors held the most valuable stake in Rapid7 Inc (NASDAQ:RPD), which was worth $94.1 million at the end of the second quarter. On the second spot was Alkeon Capital Management which amassed $66.2 million worth of shares. Moreover, Columbus Circle Investors, Citadel Investment Group, and DSAM Partners were also bullish on Rapid7 Inc (NASDAQ:RPD), allocating a large percentage of their portfolios to this stock.

Because Rapid7 Inc (NASDAQ:RPD) has witnessed a decline in interest from the smart money, we can see that there was a specific group of hedge funds who were dropping their entire stakes last quarter. It’s worth mentioning that Brian Ashford-Russell and Tim Woolley’s Polar Capital sold off the largest stake of the “upper crust” of funds watched by Insider Monkey, valued at about $7.5 million in stock, and Richard Driehaus’s Driehaus Capital was right behind this move, as the fund dropped about $2.2 million worth. These bearish behaviors are interesting, as total hedge fund interest dropped by 2 funds last quarter.