Hedge funds are not perfect. They have their bad picks just like everyone else. Facebook, a stock hedge funds have loved dearly, lost nearly 40% of its value at one point in 2018. Although hedge funds are not perfect, their consensus picks do deliver solid returns, however. Our data show the top 20 S&P 500 stocks among hedge funds beat the S&P 500 Index by 4 percentage points so far in 2019. Because hedge funds have a lot of resources and their consensus picks do well, we pay attention to what they think. In this article, we analyze what the elite funds think of Kinross Gold Corporation (NYSE:KGC).

Kinross Gold Corporation (NYSE:KGC) has seen a decrease in support from the world’s most elite money managers recently. KGC was in 18 hedge funds’ portfolios at the end of June. There were 19 hedge funds in our database with KGC holdings at the end of the previous quarter. Our calculations also showed that KGC isn’t among the 30 most popular stocks among hedge funds (see the video below).

What have hedge funds been doing with Kinross Gold Corporation (NYSE:KGC)? 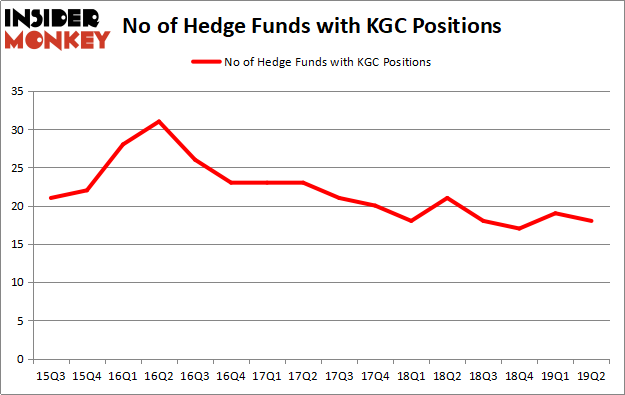 Of the funds tracked by Insider Monkey, Renaissance Technologies has the biggest position in Kinross Gold Corporation (NYSE:KGC), worth close to $220 million, amounting to 0.2% of its total 13F portfolio. On Renaissance Technologies’s heels is Crispin Odey of Odey Asset Management Group, with a $28.1 million position; 2.4% of its 13F portfolio is allocated to the stock. Some other peers with similar optimism consist of Israel Englander’s Millennium Management, John Overdeck and David Siegel’s Two Sigma Advisors and Ken Griffin’s Citadel Investment Group.

Because Kinross Gold Corporation (NYSE:KGC) has experienced a decline in interest from the aggregate hedge fund industry, we can see that there lies a certain “tier” of money managers who sold off their full holdings heading into Q3. Interestingly, Kenneth Tropin’s Graham Capital Management said goodbye to the biggest position of the 750 funds watched by Insider Monkey, comprising about $0.5 million in stock, and Matthew Hulsizer’s PEAK6 Capital Management was right behind this move, as the fund cut about $0.1 million worth. These bearish behaviors are intriguing to say the least, as total hedge fund interest was cut by 1 funds heading into Q3.

As you can see these stocks had an average of 23 hedge funds with bullish positions and the average amount invested in these stocks was $383 million. That figure was $312 million in KGC’s case. Huntsman Corporation (NYSE:HUN) is the most popular stock in this table. On the other hand 51job, Inc. (NASDAQ:JOBS) is the least popular one with only 9 bullish hedge fund positions. Kinross Gold Corporation (NYSE:KGC) is not the least popular stock in this group but hedge fund interest is still below average. Our calculations showed that top 20 most popular stocks among hedge funds returned 24.4% in 2019 through September 30th and outperformed the S&P 500 ETF (SPY) by 4 percentage points. A small number of hedge funds were also right about betting on KGC as the stock returned 18.6% during the same time frame and outperformed the market by an even larger margin.