We can judge whether Great Southern Bancorp, Inc. (NASDAQ:GSBC) is a good investment right now by following the lead of some of the best investors in the world and piggybacking their ideas. There’s no better way to get these firms’ immense resources and analytical capabilities working for us than to follow their lead into their best ideas. While not all of these picks will be winners, our research shows that these picks historically outperformed the market when we factor in known risk factors.

Great Southern Bancorp, Inc. (NASDAQ:GSBC) shareholders have witnessed a decrease in enthusiasm from smart money in recent months. GSBC was in 8 hedge funds’ portfolios at the end of June. There were 12 hedge funds in our database with GSBC holdings at the end of the previous quarter. Our calculations also showed that GSBC isn’t among the 30 most popular stocks among hedge funds (see the video below).

Heading into the third quarter of 2019, a total of 8 of the hedge funds tracked by Insider Monkey were long this stock, a change of -33% from the previous quarter. On the other hand, there were a total of 11 hedge funds with a bullish position in GSBC a year ago. With hedge funds’ capital changing hands, there exists an “upper tier” of noteworthy hedge fund managers who were increasing their stakes considerably (or already accumulated large positions). 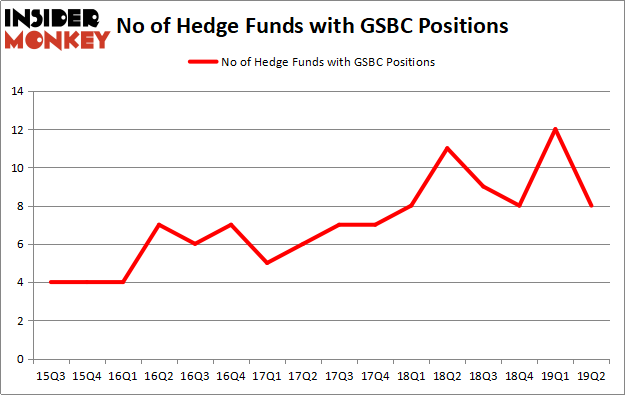 According to Insider Monkey’s hedge fund database, Renaissance Technologies holds the most valuable position in Great Southern Bancorp, Inc. (NASDAQ:GSBC). Renaissance Technologies has a $17 million position in the stock, comprising less than 0.1%% of its 13F portfolio. On Renaissance Technologies’s heels is Cliff Asness of AQR Capital Management, with a $5.6 million position; less than 0.1%% of its 13F portfolio is allocated to the stock. Remaining professional money managers that are bullish comprise Noam Gottesman’s GLG Partners, Peter Rathjens, Bruce Clarke and John Campbell’s Arrowstreet Capital and John Overdeck and David Siegel’s Two Sigma Advisors.

Since Great Southern Bancorp, Inc. (NASDAQ:GSBC) has faced a decline in interest from the smart money, it’s easy to see that there is a sect of fund managers who sold off their positions entirely heading into Q3. It’s worth mentioning that Ken Griffin’s Citadel Investment Group dumped the biggest stake of the 750 funds monitored by Insider Monkey, comprising about $0.3 million in stock. Roger Ibbotson’s fund, Zebra Capital Management, also sold off its stock, about $0.3 million worth. These moves are intriguing to say the least, as total hedge fund interest dropped by 4 funds heading into Q3.

As you can see these stocks had an average of 11.75 hedge funds with bullish positions and the average amount invested in these stocks was $54 million. That figure was $28 million in GSBC’s case. Nanometrics Incorporated (NASDAQ:NANO) is the most popular stock in this table. On the other hand The Gorman-Rupp Company (NYSEAMEX:GRC) is the least popular one with only 7 bullish hedge fund positions. Great Southern Bancorp, Inc. (NASDAQ:GSBC) is not the least popular stock in this group but hedge fund interest is still below average. This is a slightly negative signal and we’d rather spend our time researching stocks that hedge funds are piling on. Our calculations showed that top 20 most popular stocks among hedge funds returned 24.4% in 2019 through September 30th and outperformed the S&P 500 ETF (SPY) by 4 percentage points. Unfortunately GSBC wasn’t nearly as popular as these 20 stocks (hedge fund sentiment was quite bearish); GSBC investors were disappointed as the stock returned -4.3% during the third quarter and underperformed the market. If you are interested in investing in large cap stocks with huge upside potential, you should check out the top 20 most popular stocks among hedge funds as many of these stocks already outperformed the market so far in 2019.